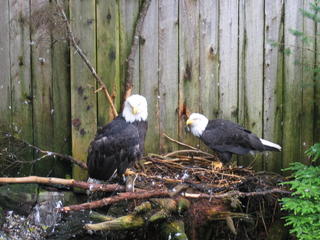 Our first port stop in Alaska, and the weather isn’t cooperating. Not raining, exactly, but spitting a steady drizzle. I guess I really can’t complain too much though, since we are in a rainforest. Apparently this town gets something like thirteen feet of rain a year.
We aren’t the only ship in port here; a Royal Caribbean is pulled up right behind us. All together, I’d guess there’s about five thousand extra people in this small town this morning. Ketchikan has all of the usual cruise port retail suspects- the chain jewelry stores, the cheesy-souvenir megamarts- plus some smaller local places. I end up dropping a fair chunk of money in the latter, as is my wont. We also found a good little bookstore, hidden upstairs in a row of tourist shops built where the town’s brothels once had been. (Romanticizing the sex trade- fun for the whole family!) We stopped on the bridge over the creek to watch the salmon trying to make their way against the current. They didn’t seem to be making much progress.
We had lunch at a restaurant in a lovely hotel on the top of a hill (the town is built on the side of a series of what look like mountains but I suspect are considered hills around here.) The food was terrific, worlds beyond what we’ve been having on the boat. We both had their ‘Crabby Patty’ (why yes, I do believe that’s a Spongebob reference), which was basically just a bunch of pieces of crab with a little melted butter and some cheese on a bun. Neither of us ate the bun. We didn’t have a whole lot of time in Ketchikan, so after lunch we went to see the sight. The Deer Mountain Fish Hatchery and Eagle Preserve is housed in a modest collection of buildings in the residential part of town. They have two injured eagles living there as an enticement for tourists, but the real business of the place is breading and releasing salmon. We were led around by a slightly impaired guide who told us about the facility with a heavily rehearsed patter. (Fact: Female bald eagles are larger then the males. Discuss.)
They have shows on board every night, in the International Show Lounge, and I have yet to go to one of them. Partly because we have the late seating for dinner, which means we get done eating at around nine-thirty, and partly because, in my experience (I went to one once) they are really not very good. Apparently, one of the primary entertainers on this cruise is a comedian whose routine is so unfunny he put one of the people at our table to sleep.
Today, the dumb guy just figured out that the menu changes every night.