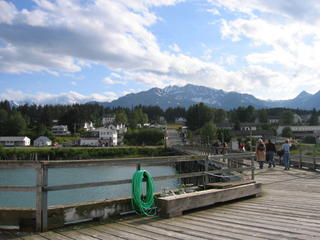 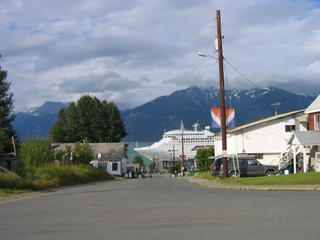 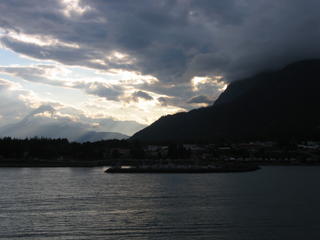 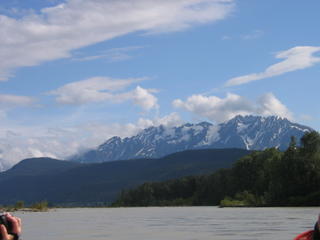 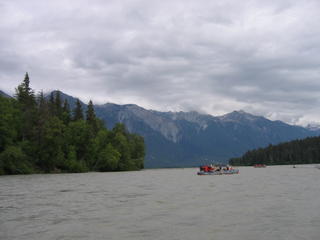 I’m not sure I love this port day after port day thing- it makes this whole vacation seem so much less slothful. Haines I like, though. It’s the smallest town we’ve stopped at in Alaska, and the least overrun by tourists. I realize that this marks me as one of those travel hypocrites who gets all grumpy because other people want to do exactly the same thing as I’m doing, but so be it. What’s a little hypocrisy between friends?
The people who live in these towns aren’t so fond of the summer influx either, and I can kind of see their point. The cruise people like to talk a lot about the money and the jobs it brings, but that only works if you work for a tour company or store, or you want to. It’s not exactly the same thing as working in the fishing or timber industries, even if the pay is better and you’re less likely to die. That said, I had a really good time in Haines.
Important task of the day: find some salmon. Or else I am going to be even more insufferable than usual for the rest of this trip. Fortunately, for once, this turns out not to be much of a challenge. Several restaurants look promising, but we settle on one just off of Haines’s tiny main street, with Roadfood-friendly red vinyl seats and poster sized old photos on the walls. The salmon was delicious.
We had signed up for another shore excursion today, a ‘float trip’ in a nearby bald eagle preserve. (A float trip is a lot like rafting, only your guide is more likely to have to get out and push.) It was about a forty minute bus ride to get out there, during which we were entertained (which is to say, lectured to) by a very outgoing and charismatic guide who, among other things, made a very convincing case against eating farmed salmon (but, oddly refrained from mentioning what it does to prices of the wild salmon that is so important to the local economy). When we got to the river they outfitted us with life jackets (in case we fell in and were carried away by the eight-inch-deep water) and rubber boots, making this my second consecutive day in borrowed footwear. Our boat had me, Megan and a family of five- mom, dad, two girls about seven and sixteen and a boy around thirteen or so. Only four people could fit in either end of the boat, so most of the family sat up front and the son got stuck in the back with us. Our guide/rower was a good looking guy in his mid-twenties, which I believe caused the teenaged daughter to die of embarrassment at her parents and siblings approximately once a minute.
We took off slowly down the river, our guide rowing while the rest of us sat around like, well, tourists. This was not a whitewater rafting trip. (In fact, at points in the river, it was barely a water rafting trip. Apparently, one of the primary features of glacial rivers is that they have a lot of silt and very little water. So we floated gently along, enjoying the first really nice weather we’ve had so far and taking random photographs in the general direction of eagles.

Apparently, the urban rigors of Haines were too much for our tablemates, so Megan and I ate our dinner in lonely splendor. Not that I’m complaining, mind you.