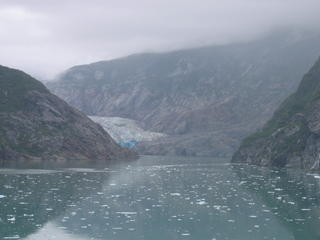 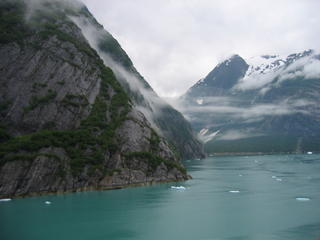 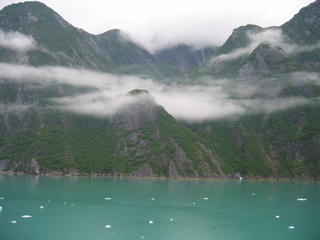 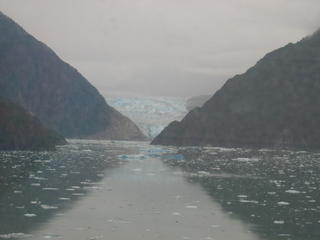 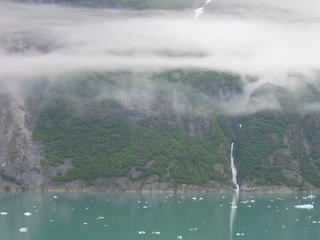 Today is technically a sea day, but it’s made a bit different by the fact that we are going in the boat to see something. That would be ‘Tracy Arm’, which would appear to be some sort of geological feature carved out by glaciers. We got to Tracy Arm around five this morning and, since the sun rose at 4:22 today the scenery should have been wholly visible. I wouldn’t know. Megan got up at around seven, to take in the sights and save us seats in the observation lounge/casino (really), but I slept until the slightly more reasonable hour of nine-thirty. After all, you see one spectacular waterfall plunging down a sheer rock wall into iceberg-laden water, you’ve seen them all.
I took my breakfast with me up to the casino, where I enjoyed the view along with my bagel (sadly, more like white bread with a hole in the middle), all to the accompaniment of the constant sound of slot machines. The place was packed- there aren’t a lot of good viewing spots on the ship- and we shared our window with a Spanish-speaking family with two young girls and a set of walkie-talkies that were inclined to feedback. The scenery really was spectacular, and much better seen from outside on the deck, but the freezing wind and spitting rain meant that I only occasionally ventured out for pictures before hurrying back to my seat.
We spent the whole morning in the Arm and came back out the way we went in, so I really didn’t miss that much by sleeping, after all. Just after coming out we passed through an area noted for its large whale population and I did see some- a couple spouts and a fluke. But mostly what I did was try to resist running from one side of the ship to the other as the onboard naturalist, who was doing a kind of play-by-play from the bridge- announced one whale sighting after another, always where I wasn’t.
I stayed in the casino through lunchtime, watching for more whales without luck and finishing my third (or maybe fourth, I’m losing count) book of the cruise. Then, exhausted by my strenuous day and sick to death of those damn slot machines, I came back to the cabin and took a long nap.