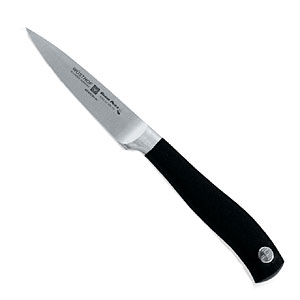 Of course, the person you are shopping for already has a paring knife. Or, at least, he or she is sure there is one around here somewhere, only people keep taking it to open packages or unscrew the back of the dvd player, because who knows where the screwdriver went, and yes there’s that one but the tip got broken off when it was used to pry that silver dollar out of the toaster, and oh yeah, every once in a while it turns up in the garage because someone has been using it for whittling.
This person needs a paring knife. 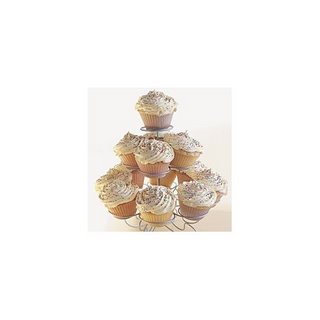 It’s a stand. For cupcakes. I realize that cupcakes are having something of a renaissance these days, as evidenced by the fact that when I was in New York I went to a bakery I had heard of as being specifically famous for making cupcakes and I had to stand in line around the corner to get in and there was a bouncer. For cupcakes. And when I did get one it was perfectly nice, the kind of cupcake someone’s mom might make for a bake sale if she had enough time not just to make a run to Safeway but not enough to bake a whole pie or something, but not what I would call wait-around-the-corner-and-get-past-the-bouncer exceptional. So, clearly, there is some kind of fashion thing going on here. But a cupcake stand? Seriously? I mean, can you imagine anything more useless? Okay, so maybe it’s cute the first time you pull it out for a party and everyone is impressed by how fashionable you are, but then what? Are you going to use it every year, until your guests start to sigh inside every time they see it? Plus, when you aren’t using it, you’ve got this big thing you have to store somewhere, and what else are you going to do with it? Decorate it with tinsel and set it in your living room? Hang your bras to dry on it?
In short: No one needs this item.