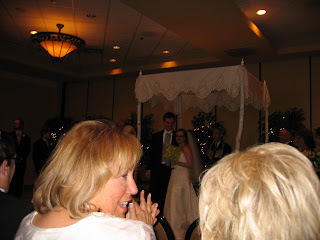 So, I was getting all set to do a complete and total writeup of the second part of my trip, to my cousin Jake’s wedding in Baltimore, until I heard a little voice. And that voice said, “Who on earth, aside from your parents, who were there, would want to read a blow-by-blow account of your cousin’s wedding?” And I had to admit it had a point. It also made me nervous for a minute there, until I realized I wasn’t actually hearing voices, I was just inventing them for comic effect.

At any rate, here’s my account of the Baltimore portion of my trip, abbreviated verson:

– East Coast crabs: tasty, but a lot of work. I think I still like dungeoness better, but that may just be locational bias.
– You can rent school buses to take your entire party out to dinner. Who knew? Also, less leg room than I remembered.
– There should be a special place in ettiquette hell for people who will come to a wedding (not their own) in a white dress, boot the grandfather of the groom out of his seat (because “we’re close friends of the bride’s mother”) and chew gum all the way through the ceremony.
– Trees that have been chewed on by beavers look exactly like they do in the cartoons.
– There really is no upper limit on the amount of time you can spend watching four baby squirrels running around on (and into a hole in) a tree.
– “Plumping” lip gloss hurts like hell.
– If you want to see rock stars, stay at the Sheraton in Columbia, Maryland; it’s right next to a concert venue. My parents saw My Chemical Romance leaving (the day before they cancelled several tour dates due to severe food poisoning), and while John Legend’s presence was never actually confirmed, there was a giant bus parked outside and several equally giant bodyguards staking out the lobby.
– One should be careful when ordering soup in a strange place, on the chance that the potato-garlic is not, as one imagined, a hearty, creamy, flavorful dish, but rather the vegan option, with lumps of undercooked potato floating in “vegetable stock” (sadly, as vegetables are somewhat lacking in marrowbones, they make for a weak stock base). You will still be hungry, even if the bread is good, and you will be cranky for the rest of the day, until somebody gets you a cookie.
– On the other hand, you can get some pretty excellent sushi in suburban Maryland. Again, I say; who knew?