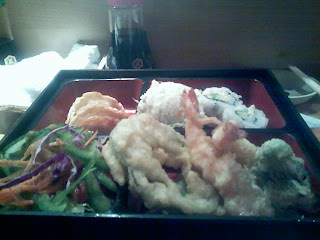 Last week, while I was having my dinner, I was able to pretend fairly convincingly that I was an expat, living in Tokyo, eating at the neighborhood restaurant around the corner from my tiny furnished apartment. Tonight, with the couple to my right discussing Flickr and the band String Cheese Incident and the couple on my left chatting in Spanish, that was significantly more difficult. Especially when I realized that the servers and chefs were speaking Mandarin.

As the name suggests, this was primarily a sushi restaurant, similar to a sushi boat place but with the dishes going around on a conveyer belt under a plexiglas cover instead of boats on water. It was plenty crowded, mostly with families (which led to my favorite overheard comment of the evening: a boy of about six or seven who declared, “I LOVE sushi.” Only in California, folks.) Some of the rolls looking interesting, but I was here for tempura, so tempura it was. I got the combination bento, with gyoza and California roll, because if a place has a dish in its name you really ought to try it.

I’ll admit, I wasn’t expecting much from this one, and unfortunately I was not particularly surprised. As usual, the tempura started out tasty, as long as it was hot, but it went downhill fast. The broccoli was severely oversaturated with batter, and there was a large piece of green pepper, my least favorite tempura vegetable. The gyoza were fine, and the roll was pleasingly cucumber-free, if made with fake crab. This is also the only time I’ve had miso soup with mushrooms and sweet potato in it, served with a spoon. All in all, not my favorite, though it’s possible it would be better to just go for sushi.