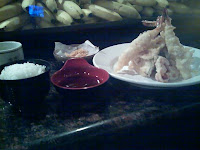 Early tempuraizing this week, because I didn’t want to try and fight my way through the horde of sushi-crazed romantics who will descend on the restaurants tomorrow.

I came in predisposed to like this place. It’s open and airy and across the street from M is For Mystery, a fine mystery bookstore. Furthermore, as soon as I sat down I got a bowl of sweet fried wonton wrapper, which didn’t strike me as particularly Japanese but was very tasty. Also, after dinner they served me plate with some slices of banana with whipped cream and chocolate and cubed pineapple with a cherry (in a cup). Which was all very nice, but somewhat hard to eat, as the only utensils I had left were the two toothpicks that came with it.

Food:$18.50 for the tempura/sashimi combo. Definitely the most generous servings of the places so far. The tempura came with four shrimp, as well as a good variety of vegetables, with eggplant, zucchini and some kind of white sweet potato as the standouts. Unfortunately, the twin powers of over-battering and sogginess overcame the forces of good, and the tempura ended up being just barely above average. Also, the sashimi was somewhat suboptimal; the pieces of tuna had some connective tissue and the yellowtail was dry on one side. That said, it looked like there were some interesting rolls on the menu and the miso soup was some of the best I’ve had so far. Still, not really a win.