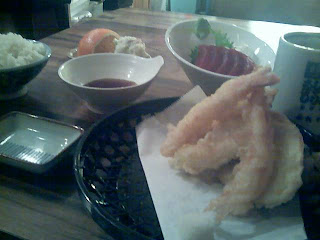 I write this while watching American Idol, which might just seem like another example of me admitting to my failings for the sake of the blog, but in this case is actually relevant. You see, a lot of the time you can tell just by looking at a contestant if they are going to be potentially good or a cringe-generating disaster. But every once in a while one of them surprises you– someone cool and together-looking bursts out with a screechy warble, or the dork in the dumb shirt sings his poorly-coifed head off. Which is all a long way of saying that I went into my dinner tonight, at a nondescript and average-looking restaurant just off of what passes in San Mateo for a main drag, without high hopes, and I was pleasantly surprised.

Not immediately, mind you. When I came in, the waitress asked if would like to sit at the sushi bar (which they almost always seem to do if you are dining solo– I don’t like it because you just don’t have enough space for eating a full dinner) and seemed put out when I asked for a table, despite the fact that the place was almost empty, then seated me way back by the rear exit. So points off for service, but to their credit things did pick up some later in the evening.

Food: Like I said, given the surroundings I wasn’t expecting much, though I was encouraged by the number of dishes I didn’t recognize on the menu (new idea for my next project: go to every restaurant in the neighborhood and try something I’ve never had before). As usual, I ordered the tempura/sashimi combo ($12.95, with soup, salads (green and potato), rice and orange slices). As expected for the price, the sashimi wasn’t the best, but it wasn’t bad, and the tempura was really quite good. The batter was thin and crisp, even when I got to the last piece and it wasn’t scalding hot anymore and, unusually, the shrimp actually had some flavor of its own, rather than just being a vaguely seafoody fried thing. Points off, again, for lack of originality in ingredient choice, particularly in including two pieces of broccoli, which is fast becoming my tempura bete noir. But overall, a highly positive dining experience.