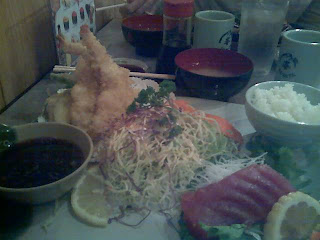 As you may have noticed, this week’s tempura tasting is taking place outside of my usual range. As it happens, this week was rather busy, and before I knew it, it was Friday (today). And since I had an appointment to get my hair cut today in Berkeley (hey, a good stylist is hard to find), I met my parents for dinner at the Japanese restaurant we used to go to a lot when I was a kid. It’s a tiny place and we had to wait about ten minutes for a table, but the people were friendly, if somewhat disorganized.

Food: Tonight was somewhat different than usual, since I was eating somewhere I had been before and I wasn’t dining alone. The latter part was a definite improvement, as I could give the pieces I didn’t want to my dad and because we could also order some sushi to start. We had the “special California roll”, made with real crab (I asked) and topped with tobiko, which all by itself added a point to the overall score. (Mainly for the crab. It’s hard to find real crab in sushi, and I don’t see any point in eating the fake stuff.)
The first difference, the one about having been there before, actually made the judging a little harder. I knew as soon as I took a bite of the tempura (combo with tekka sashimi, 19.95) that this was the tempura of my memory, and I had trouble getting away from that to judge the dish objectively. Ultimately, I thought it was fairly good, crisp batter, good selection of vegetables, generous amount of shrimp, but hampered by overbattering and ultimately a little bit heavy. The sashimi was also fine, if not spectacular (incidentally, this was the restaurant where I first tried raw fish, in the form of tekka sashimi when I was twelve or thirteen).

There’s another restaurant, way down San Pablo Ave. in El Cerrito, where my family used to go when I was even younger, and where I believe I did most of my early tempura-eating (according to my mom, who would know, what I primarily had in Japan was tonkatsu). I’ll try and get over there at some point and see how that one holds up. 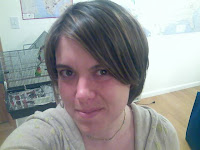 ADDENDUM, because I know you care so much:
The haircut I drove to Berkeley to get. I like it. (It’s more interesting than in this picture.)