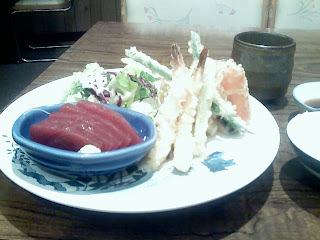 Tonight my primary criterion for choosing a restaurant was parking. It was starting to rain and, being me, I hadn’t bothered to wear any sort of jacket, so I wasn’t about to take a spot three blocks away from where I was going. Which meant the main drag downtown was out, so I ended up wandering a little farther afield. The restaurant was on the corner of a relatively quiet street, and it wasn’t exactly crowded, but I didn’t necessarily consider that a bad sign. The decor was midcentury-family room, with fake wood panelling, formica tables, well-worn chairs upholstered in floral plastic. Hipster bars spend thousands trying to achieve this level of authenticity.

Food: So I wanted to like this place; it was exactly what you would expect your secret special find of a great hidden restaurant to be. But things started looking down when the food started coming, beginning with the pickles, which were more like chunks of cucumber in vinegar dressing, and continuing with the uninspiring soup. So by the time my dinner arrived my expectations had been readjusted, in a more realistic direction, as it happened.

First, the good news. The selection of vegetables in the tempura was large and varied and the lychee sorbet they had for dessert was delicious. The tempura itself, unfortunately, not so much. As usual, it wasn’t bad at first, but it was heavy and greasy (the napkin they put down under it was entirely soaked in oil by the end of the meal) and became nearly inedible when it got cold. Also, the batter kept coming loose from the pieces, and you really should pull the strings from green beans before you serve them. So the place wasn’t exactly a winner, which was why I was surprised to overhear one of the other people there say that they come here all the way from San Ramon (!) for the sushi. So I’ll give it the benefit of the doubt on that, though I will say that the sashimi they served me was unexceptional. (I wonder if ordering a tempura/sashimi combo marks you out as someone who doesn’t know their stuff, and therefore gets you the lesser pieces of fish.)

A pity, really; it would have been nice to find a good place with parking.