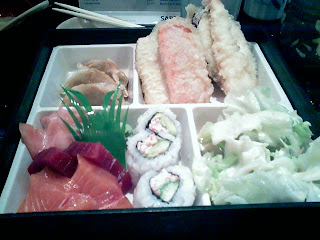 Like any good researcher, I try to be as objective consistent as possible in my collection of data. But sometimes external factors do interfere. Like yesterday, for example. At lunchtime I went down to the cafeteria for my diet-compatible cup of soup, only to find that they were nearly out of the tomato-basil, the most edible option. There was almost, but not quite, enough to make a small serving, which I complemented with some Sun Chips from the vending machine, but it was still a somewhat light lunch. Then I went to the gym in the afternoon and ran four miles on the treadmill, which was all very good for me, but it did mean that by the time I took my seat at the sushi bar in my tenth Japanese restaurant so far, I was absolutely famished. Which I realize may have an influence on my response to the

Food: They got off to a good start by bringing out a dish of edamame, which is never a bad thing. The combo options were a little different here; with the closest to my usual including gyoza and california roll along with the tempura and sashimi. I didn’t mind that, though the crab in the cali roll was blatantly fake. Like I said, I was very hungry. Which is why the evaluation of the rest of the meal gets a little tricky. So, yes, I did eat all of the tempura, aside from the broccoli and the last bit of the shrimp, and I did appreciate the vegetable variety (particularly the eggplant and yam). But on the other hand, the last couple of bites (when I was no longer hungry and the tempura was no longer hot) were nearly inedible and I left the restaurant with a feeling like I had consumed a large, deep-fried rock. Also, the sashimi was some of the lowest-quality I have had so far. So, while it looks like the grades I’m giving here are pretty straightforward, some complicated figuring has gone into them (points on for edamame and gyoza, points off for bad sashimi, points on for me eating the whole thing, off for maybe it wasn’t really that good, etc.).