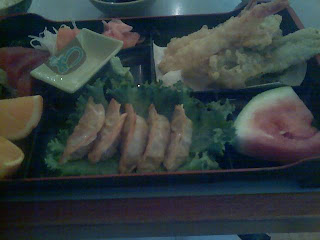 I think, at this point, I may have fallen victim to the malaise that seems to strike almost every reviewer after continual exposure to the thing they are reviewing. I still like tempura, I think, and anyway I have come far enough in this misguided project that I feel the need to see it through to the greasy, deep-fried end. It’s just that I find the way I approach the food has changed; I can eat something that someone else might consider a perfectly adequate meal and see only the flaws, complaining about predictability and demanding possibly unreasonably high standards of excellence. It’s the same thing I have been noticing lately in certain movie critics (*coughcough* Entertainment Weekly *cough*), and I wonder if this sort of thinking is simply an occupational hazard of the reviewing game. On the other hand, I always have been a judgmental bitch.

All of which is to say that I was, again, underwhelmed by the tempura at my latest stop. It wasn’t appalling; as usual, when it was hot it was much better, though the fact that the first bite I took of the shrimp netted me only batter. And, as usual, as the food cooled it gradually transitioned from “tasty” to “kinda heavy” to “urgh.” As far as the vegetables went, I appreciated the sweet potato and zucchini, but not the green pepper and broccoli. The sashimi wasn’t bad, definitely higher quality than some I’ve had, but not fantastic either. Since this place had as their option for the combo meal a choice of three items from the list, I again added the gyoza, which this time came with an insidiously spicy dipping sauce.
Interestingly, this was the second week in a row that I ate at a Japanese restaurant run by Chinese people. The last one was more upfront about it, with shu mai on the menu and the very un-Japanese names of the sushi chefs on their business cards displayed on the bar. This time I only had the evidence of the TV being tuned to the local Mandarin-language station, but I consider that to be proof enough.