New blog project! (Blogect? Prog?) For my next trick, I will be reading all the books that have won the Edgar Award for best novel in the history of the award. I got the idea from a suggestion for starting a book group to read every Pulitzer winner, which sounded educational but not like a lot of fun. Therefore, The Edgars. And now, for my first trick: 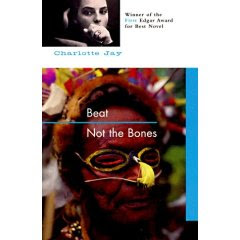 Coming into this, I honestly didn’t know what to expect. My knowledge of literary trends of the fifties is limited (by which I mean “nonexistent”), and about this particular book and author I knew nothing at all. According to wikipedia she was a prominant suspense writer, though she only published nine books, most of which were set in Austrailia and Asia. This one is set in Papua New Guinea under the Australian colonial rule. A member of the colonial government shoots himself after returning from a trip into the jungle to investigate claims of gold discovery, his suicide attributed to the gambling debts. But his young widow, arriving from Australia, is convinced there is more to it and is determined to investigate. In the course of the book she manages to transition from a young woman happy to be led passively through life by the people around her (her father, her husband) to an active force in her own right, without any you-go-girl historonics or moments of blinding revelation.

It sounds like a mystery novel, but I’m not sure if I had read it unlabeled, if that’s where I would have put it in the bookstore. The plot actually takes up a fairly minor portion of the book, both in terms of words and psychological space, the focus being instead more on the characters and the atmosphere of the setting. A lot of attention is also given to the problems of “modern” colonialism, of bringing “primitive” peoples into the modern world while preserving their rights and treating them with some measure of respect.

I may be making this sound like some sort of ultra-literary polemic, which it isn’t. Though I wouldn’t say there may not have been some literary liberal guilt motivating this particular award-giving, it’s a very well-written book and an interesting one. Also, I read it in a single afternoon, which is as useful a measure of a good book as I know of.