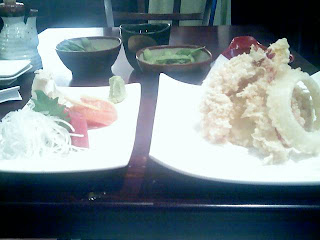 I thought I was almost done. I had three more restaurants to try and then I was going to tie this little project up with a bow and call it a day. That was manageable. I could do that. And then, while I was looking for parking near one of them tonight, I found two more. And another one across the street. And one of them had opened within the last month. I can see my future stretching out before me, and it is deep-fried and shrimpy.

As it happened, I found a spot in front of the new restaurant, so I went there. It was definitely on the fancier side of the places I have been, very new and modern, with a lot of dark wood and brushed steel. Like most of the places I’ve been to lately, it was uncrowded (with four Japanese restaurants within a block, how could it be otherwise?) and an overabundance of staff stood at the ready. It got to the point that I felt bad to drink my tea, because as soon as it was about a third of the way down, the waitress would appear to refill my cup.

Food: For once, I am not going to grade primarily on tempura. Why? Because, that’s why. I had a very good dinner with excellent service, and if one of the three dishes I had was only average, then I can live with that. Edamame, still warm, came out as soon as I sat down, which is always a good start. (Fun fact! At one point I thought I hated edamame. Then I tried some and realized I didn’t. Apparently, it was something else I hated. Not sure what.) My combo dinner options were little different this time, with two items from column A (I chose the tempura with a beef with onions dish, the name of which escapes me (not pictured)) and one from column B (sashimi, of course). It was a little pricier than other places I’ve been to, but the reason for that became clear once the food started to come out. Rather than the small portions of a bento, each component was a complete dish, resulting in an amount of food that was approximately dinner for three. What’s more, while I was hopelessly plowing my way through this mountain of food, who should appear but the waitress, bearing a special little dish prepared by the sushi chefs, a “new thing they were trying out.” This turned out to be a jalepeno, hollowed out and filled with salmon, then baked with a creamy mustard sauce on top and sliced into sushi-sized pieces. My wimpdom when it comes to spicy food is well-documented, but taking out the innards seemed to have defused the power of the pepper, and I found the dish not only eatable, but delicious. And the sashimi was distinctly above average, and the beef dish, whatever it was, was still very good when I heated it up for lunch on Friday, and even the orange slices were extra-good. So if maybe the tempura was a little plain, and the vegetable selection somewhat starchy and uninspired then, well, maybe that isn’t the be-all and end-all of restaurant judging. This time, at least.