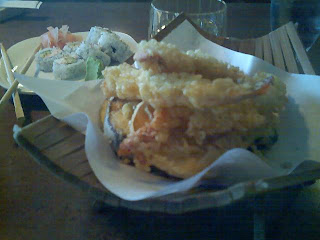 It’s May, and the temperatures in the Bay Area are hitting the eighties, which means it’s time for people to lie on the floor and moan about how they’re going to die of heatstroke. Me, I’m eating tempura.

That’s right. After a break for travel (and a delay in posting because I was too lazy/otherwise occupied to write this up last week) we’re back! I’m here to chew bubble gum and eat tempura, and I’m all out of bubble gum. Which is a good thing, because that would be gross.

In a slight deviation from my usual pattern, this week I took on a place outside of San Mateo’s main drag, on El Camino just off the exit from 92. Also different is the fact that the restaurant is clearly trying to distinguish itself as a fancy and modern place (witness, the name) in what looks to be a reconditioned Perko’s.

Food:
There was no sashimi option in the combo listings, so I had to make do with a California to go with my tempura (for the relatively high price of eighteen dollars). They brought out the usual starters fairly promptly (there was almost no one else in the restaurant): a salad which, like many of the places I have visited, they kept premade in the refrigerator, really putting the “ice” in iceberg, and possibly the worst miso soup I have had so far; much too salty, with an unidentifiably odd taste (did they make it with chicken broth or something?). I was disappointed not to get edamame, which I think is a clear sign that I am getting spoiled.

The entrees came in separate dishes, a presentation that always makes me feel like I have ordered too much food, because I have. The roll came first, and while it was nicely prepared with a welcome lack of cucumber, it was disappointingly made with imitation crab. (Helpful hint for restaurants trying to make themselves “fancy”: “Fancy” restaurants do not generally replace ingredients with cheaper, fake, alternatives.) The tempura was fine, even a little crisper than usual, though that may have been due to being slightly overcooked. The selection of vegetables was unimaginative (sweet potato, eggplant, zucchini, something I’m forgetting), but they left out the bad ones, the shrimp were decently large and nothing was over-battered. But, in the same way I feel obligated to give extra points if I clean my plate, I think that if partway through eating the dish I take a bite and have to stop because I feel ill, that counts as an automatic one-point deduction.

Reviewing: It’s more of an art than a science.