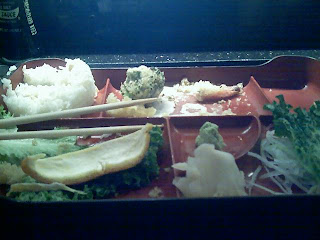 Well, I forgot to take the photo again, so you’re going to have to take the existence if tonight’s dinner on faith. Though you might be able to guess at the nature of this review from the state of the dishes.

I had been putting off my visit to this place, because it didn’t look very promising from the outside– just another hole-in-the-wall among on the edges of the downtown. My first surprise, then was to go inside and find it large and bright, and decently crowded, unlike the last several places I’ve been. I took a place at the sushi bar, and found I was lucky to get it; in the time I was there a line formed that filled the entryway and I was feeling kind of bad about taking my seat between two empty ones.

Food:
When you get lines out (or at least up to) the door, I think you should be able to expect, or at least reasonably hope for, good food. And, in this case, your hopes would not be unreasonable. After last week’s example of fancy signs on a lousy restaurant I had pretty much given up on expectations, and when I realized that every one of the combination bentos included tempura I wasn’t very hopeful (after all, if they’re just churning it out for everything, can it really be that good?), so you can imagine my surprise when my food came and it was excellent. True, I did have to pull a lump of batter off the end of the shrimp before I could even get to it and the broccoli was, as usual, hopeless, but overall I would have to say that this was some of the best tempura I have had so far. It arrived crisp and delicious, didn’t become heavy or greasy even when it cooled down, came with a good, reasonably interesting selection of vegetables and didn’t leave me feeling like I had just drunk the contents of a fryolater. The rest of the bento was composed of some slightly-above-average tuna sashimi and some very nice gyoza, though points off for only offering California rolls with imitation crab. (I know, everywhere does it, I just keep hoping…) And, of course, the whole experience was improved by the fact that there were a dozen or so people waiting to get in and wishing they were me, happily sitting down and eating this good food.