Of all the great cities in the world, Tokyo, it must be said, is probably among the ugliest. It is fascinating, energetic, odd, charming and exciting even when there is nothing specific going on, but it is not at all beautiful. There is no iconic skyline to wow you on the train ride from the airport, no graceful old (or, for that matter, new) buildings to catch glimpses of, just a fug of square buildings of various sizes and all the power and telephone lines you could want. (Undergrounding of utilities doesn’t seem to have caught on here, though the undergrounding of the shopping malls is going quite well.) It really isn’t the city’s fault– the place was bombed to oblivion in WWII, which meant it was largely rebuilt in the fifties, sixties and seventies, otherwise known and the “astoundingly ugly” period of international architecture.

None of which made much of an impression on me, since I was so tired after spending the last eighty hours (approx.) getting there that I slept for most of the train trip. When I woke up I saw a sign advertising the BBQ Tanning Salon, so I knew we were in the right place. 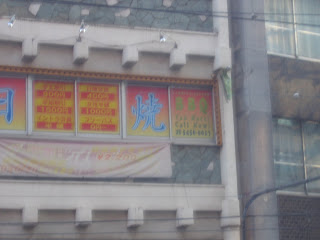 There is a downside to arriving in Tokyo massively jet-lagged. (And, barring a lottery win or a lot of frequent flyer miles, that seems like the only way I’m ever likely to arrive there.) The downside is that it is a very busy and confusing place, and while a surprising number of the signs are in English, a key percentage are not. Also, you’re too whacked out to properly read your map, and end up determining that the best way to get from where you are in the train station to your hotel is to go through the very fancy department store, dragging your wheelie suitcase and unwashed hair past impeccable ladies shopping for three thousand dollar purses, then down some stairs, then down some more stairs, then around a building, then up a bit, then back to the street and to your hotel, around a corner and about a block and a half away from where you started. Which is the sort of thing that can get you thinking in run-on sentences, if you know what I mean.*