One of the things I was particularly curious about seeing in Japan was the vending machines (I know, my life is so thrilling you just can’t stand it). I’d heard the rumors about them– that they were everywhere, and sold everything, you could get breakfast, lunch dinner and beer and a three-piece suit, just by pointing your cell phone at one.

The cell phone part was true, and in limited instance the beer, but that was about it. (The most unusual item we actually saw for sale was umbrellas, which really isn’t a bad idea. Dehumidifiers would have been even better.)

Actually, the ubiquity part was true too, vending machines in Tokyo crop up at a rate of about three per block. Right out in the open, even in little back alleys, which would seem like you might as well stick a sign that says “please vandalize me, and by the way there’s money in here,” but I guess that’s less of a concern in civilized countries. But all they sold were beverages. (And cigarettes, but we weren’t terribly interested in those, after the initial shock of being in a place where it was still legal to smoke in public.) The machines were maintained by a variety of companies, but they all had about the same selection: soda, water, tea and coffee (both with and without milk and sugar), various drinks with implied health benefits and, occasionally, cocoa. All cold, for the most part, though some machines also had hot offerings, identified by red labels. (Actually, identified by Cameron buying one and saying, “This is hot!” and then our examining the machine and determining that some of the displayed drinks had red labels, while the rest were blue.) 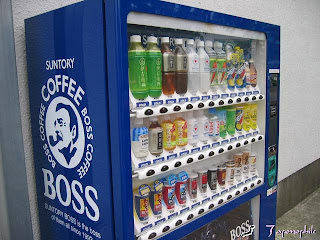 Cameron developed something of an affinity for the vending machine iced coffees and, like the pastries in Strasbourg, determined to try them all, prioritizing by most insane labels.

Here’s the thing, though: lots of vending machines, no trash cans. Seriously, none, except right at the vending machines, which of course are all around you when don’t need one, but when you’re carrying a can you’d really like to throw away there isn’t one for miles. Especially inconvenient when you have accidentally purchased a drink with little bits of jello in it.

2 thoughts on “Caffinator: Rise of the Machines”