(In an effort to hop on the classic literature/monster bandwagon (See: “Pride and Prejudice and Zombies” and the upcoming “Sense and Sensibility and Sea Monsters”) I present you with the opening lines to my new literary masterpiece, which I expect to earn me the adoration of the adoring masses and a honking big advance within the next week or so.) 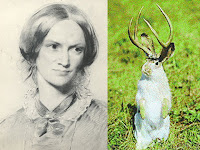 There was no possibility of taking a walk that day. Which was much lamented, because Eliza had spotted tracks the night before, and left out some whiskey to inebriate the beast, but now the chance of a hunt seemed lost. We had been wandering, indeed, in the leafless shrubbery an hour in the morning (poor cover, that, and a waste of time, since the creature rarely rose before midday); but since dinner (Mrs. Reed, when there was no company, dined early) the cold winter wind had brought with it clouds so sombre, and a rain so penetrating, that further hunting was now out of the question.

I was glad of it: I was a miserable shot, and the sorry little sawed-off shotgun I had received as a hand-me-down from John paled in comparison to his gleaming new rifle, or Georgiana’s sleek crossbow. I never liked long hunts, especially on chilly afternoons: dreadful to me was the coming home in the raw twilight, with nipped fingers and toes, an empty sack and a heart saddened by the chidings of Bessie, the nurse, and humbled by the consciousness of my physical inferiority to Eliza, John, and Georgiana Reed.

2 thoughts on “Jane Eyre and the Jackalope”