It started as a simple mission: to find and observe the weekly gathering of Tokyo cosplayers on a bridge near Harajuku. Only, because it turns out that people who spend their weekends dressing as insane schoolgirls are not the early risers of the world, and because the map from my guidebook was not strictly accurate, we ended up wandering around, confused, near the entrance to Meiji-jingu park (which we also visited, but that’s another story, involving parasols and clapping), during which we couldn’t help noticing a fairly major police presence in the area. 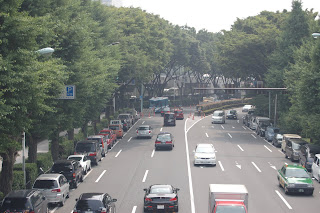 (It’s not immediately obvious, but there’s a roadbock there where the street bends; just beyond it is a police bus with barred windows and cops in riot gear.)

We thought at first that it might have something to do with the large event that seemed to be going on in the nearby sports arena, but abandoned that theory when that turned out to be the Japanese national cheerleading championships (I think Cameron is still mad I didn’t let him go.).

So, curious and without much else to do, we made our way towards the source of the police activity. Where we found. . . a Bangladesh culture fair. With booths selling curry and crafts (Cameron bought me a scarf, as I had not yet managed to get myself any cash.), a performance stage and, for some reason, a produce stand. The closest thing we saw to criminal activity was a man in short-shorts and a sparkly shirt on the stage, murdering the very idea of music. But the still-significant police presence didn’t pay much attention to him, so that must not have been it.

In fact, they didn’t seem to be paying much attention to the fair at all; most of the cops were concentrated around one area, where they stood in semi-guard across a pedestrian avenue through the park. But they weren’t stopping people who walked through it, just directing them to use the designated walking-through area. So we went.

I will admit, it was nervous-making, crossing a police line into the unknown. But this was Tokyo, after all, where a rioting mob is probably calmer and better organized than your average Raiders luxury box. This particular threat seemed to consist of a couple hundred people with headbands and pinned-on bibs, sitting calmly on the ground and listening to a petite young woman exhort them vigorously. I couldn’t understand what she was saying, but she clearly felt very strongly about it. 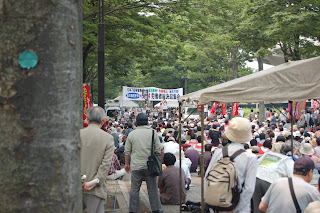 Based on the presence of a Che Guevara t-shirt, that icon of half-baked rebellion*, I guessed Communists. Which turned out to be the case, as far as the limited English of the policeman I marched up to and asked could explain.

And so it was that, having grown up in Berkeley, I attended my first-ever Communist rally in Harajuku. I can’t put my finger on it, but I feel like there might be some irony in there somewhere.

*Although, without it, we would never have shirts like this one, so I shouldn’t be ungrateful.