You know how sometimes you read something that just sticks with you, for years after you read it? Something you wish you could see, only you know that the chances of that are very slim? But every once in a while, you do. . .

I’ve been a big Dave Barry fan ever since I found a collection of his columns in the back bedroom where I would sleep when we visited my grandparents (I think my aunt and uncle gave it to them). I bought every book by him, read his columns online when I went to college and the LA Times didn’t syndicate them, and I’m still a big fan of his blog.

One of my early favorites of his books is Dave Barry Does Japan, which I bought when it came out in 1992 and I was fifteen, and which probably informed more of my ideas about that country than I am comfortable admitting. It was, and is, very funny throughout, but this passage in particular is one that stuck in my mind:

. . . But after seeing what passes for hipness in Harajuku, I felt like Jimi Hendrix. I felt cool enough to be on the cover of Rolling Stone.

I started feeling this way the instant we arrived, because the first thing we saw was the Bad-Ass Greasers. These were young men, maybe a dozen of them, deeply into the 1950s-American-juvenile-delinquent look, all dressed identically in tight black T-shirts, tight black pants, black socks and pointy black shoes. Each one had a lovingly constructed, carefully maintained, major-league caliber 1950s-style duck’s-ass haircut, held in place by the annual petroleum output of Kuwait. One of them had a pompadour tall enough to conceal former president Carter.

One of them turned on a boom-box cassette tape of “Heartbreak Hotel.” The circle started clapping to the music; one of them got up, went to the middle of the circle, and began dancing. The dance he chose to do was– get ready for the epitome of menacing Badness– the Twist. He did it stiffly, awkwardly, looking kind of like Steve Martin and Dan Aykroyd doing the wild-and-crazy-guys routine, except that he was deadly serious. So were the guys clapping in the circle. They clearly believed that they were too hip for mortal comprehension. They did not seem to sense that they might look a little silly, like a gang of Hell’s Angels that tries to terrorize a small town while wearing tutus.

And the great thing is, seventeen years later, they’re still there: 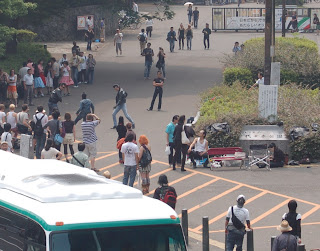 Fewer than there were, and they seemed to be more aware of themselves as a tourist attraction, but otherwise exactly as described. Plus, they possessed the only American car in Japan: 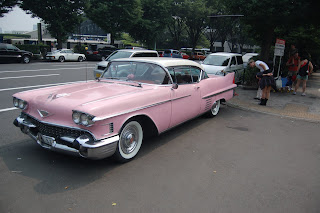