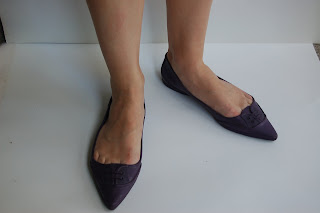 Notes: Loyal readers* of this blog may have gotten the not-unreasonable impression that I have a thing for fancy designer shoe brands. This is not entirely untrue, but even I have my limits. And one of the things outside of these limits is paying more than twenty dollars for anything that has been produced by injection-molding, no matter whose name is on the label.

Of course, you roll your eyes at that. “Ooh, is that your big stand?” you say. “Must be nice, only having to skip things that would never come up in this reality.”

“That’s what you think,” I respond, somewhat tartly, because I still have a cold and it’s making me cranky. “Well, take a look at this. And this. Not to mention this. Which reminds me, don’t even get me started on the flip-flops.”

Look, I do believe that, to a certain extent, you get what you pay for. But I am also aware that the markup on items like designer shoes is already extreme (hence my devotion to the discount), and when you throw in cheap materials and manufacturing techniques then you, my friend, are being taken.

All of which is a very roundabout way of saying that I wasn’t intending to buy these shoes, despite having seen them somewhere and thought they were cute and kind of amusing, because they very clearly violated my price policy. But then, on one of the group shopping trips to Walnut Creek of bygone days (group consisting of some combination of myself, Mary, Abigail and Alice) (bygone days consisting of before half of everyone moved to the East Coast), I came across them in some combination of sale conditions– extra sixty-percent off on all sale shoes, I believe– that put them at somewhere around $19.60. Which means I get to both have the shoes and be smug and self-righteous about them.