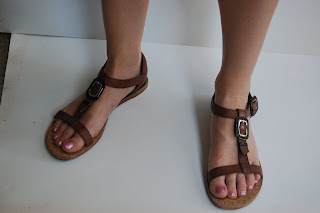 Notes: I’m sure, as readers of this blog, you have been assuming, hoping, even, that I have forgotten about the Japan trip and my assertion that I would continue writing it up until I got to the very end, or at least past the second day. But I haven’t. I remember it quite often, largely with feelings of guilt. But if I’m not going to get around to writing the actual blog posts, at the very least I can approach it tangentially.

I bought these sandals with the express purpose of wearing them on the trip. I figured, it being summer in a city known for being somewhat warm and humid, I would need sandals with plenty of breathing room. So I bought these, and had rubber soles added over the leather ones (for traction and a bit of extra padding) and away we went.

I won’t say they were not as advertised, comfortable and fashionable, but I will admit, however grudgingly, that I do understand why so many tourists choose the clunky and well-padded over the attractive in travel footwear. By which I mean, by the end of the first day, which involved much walking, I was footsore and cranky, and came close to picking a fight with Cameron over whether or no we were going to go out for dinner. I learned to soak my feet at the end of every day, which improved matters immensely.

All that aside, I wouldn’t say I regret my decisions. As a visitor in Japan I already felt like a wrinkled, style-less, spotty giant. If the occasional hot bath was what it took to keep me from adding “marshmallow-footed” to that description, then, well, that’s what it took.