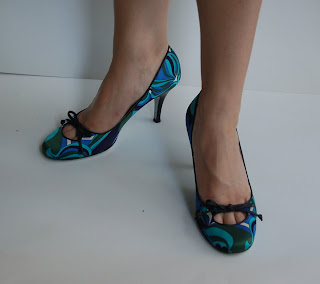 Notes: There is a story here that I am not going to tell. Not because it’s so shocking (it’s not) or personal (sort of, but not really) or because I am ashamed of it (that might actually be part of it, though it really shouldn’t be). There are two reasons I’m not telling you the story I am telling you about not telling: one is that it’s hard to do without coming off as obnoxiously whiny, and the other has to do with these shoes. But I will explain.

At one time, I was in grad school, in a PhD program in molecular biology. Then I wasn’t in grad school anymore, though I did receive a master’s as a lovely parting gift. How that came about was the source of some unhappiness, and one tearful rant by the pool in Bali, for me. For some time afterwards I harbored a certain amount of anger, and occasional fantasies of poetic justice (or, frankly, flat-out revenge). And then there were these shoes.

I wanted the shoes. They were beautiful; fun, bright, adorably proportioned and perfectly suited to my style. But they cost more money than I had ever spent on an item of clothing before in my life, even at DSW. So I was torn.

I think the original idea came from Ben, though I don’t think he ever anticipated it being taken to the logical extreme. It had to do with making a psychological sacrifice for a physical acquisition, though I think the original example had to do with letting go of a minor annoyance to purchase ice cream at a baseball game*. But, I figured, if ice cream, why not shoes? The payment would have to be much greater, of course. I would have to let go of something bad for me that I was really holding on to, something big.

Which is how it came to be that I exchanged my bitterness at my entire grad school experience for a pair of Pucci heels. It isn’t perfect, and I do still catch myself fantasizing about costing my former advisor a job, when he finally loses his tenure and comes crawling to industry, but for the most part I catch myself, and remind myself that I can’t do that sort of thing, because I have fabulous shoes.

As The Manolo says, Pucci makes the smiles!