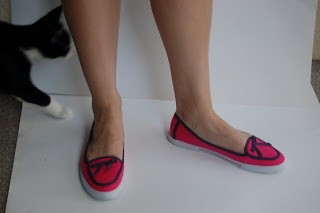 Notes: I admit my shoe inspirations are not always entirely original. I believe I picked up the Sigerson Morrison obsession from Lisa, leading to the somewhat amusing moment when we discovered that we owned the exact same pair of kitten-heel slingbacks (not pictured, yet) and my first great shoe purchase (also as-yet unphotographed) probably wouldn’t have been Ferragamos if my grandmother hadn’t owned several pairs she bought in Italy. These aren’t actually the same thing, but they fall into the general category. They happen to be cheap and colorful knockoffs of the famous Belgian Shoes (with a resemblance so close as to make me wonder if there might be a copyright-infringement lawsuit in here somewhere), known to me because of the pairs owned by Cornelia Read, new resident of New Hampshire, now-corresponding member of my writing group and author extraordinaire, currently suffering from genre issues and the potential of weasel vomit but sure to pull out of it with flying colors. I will admit to a certain amount of jealousy of her writing prowess, but I would dispute the theory that these represent some sort of mystical consuming-the-powers-of-another-by-wearing-similar-shoes thing. To be honest, I just thought they were cool.

Remember: Bad artists copy. Great artists steal. And people who have only ever made $145 dollars* from their art buy cheap knockoffs.

*Got paid for my story today!

1 thought on “Shoetember: I Am Nothing If Not Sincere in My Flattery”