(We interrupt your ongoing hair-based whining to bring you your regularly scheduled post about shoes. We are nothing if not consistent in our shallowness.) 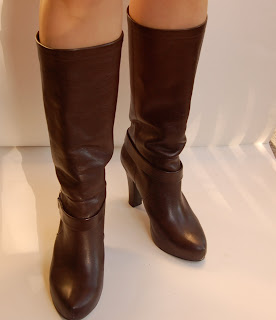 Because I consistently overpack for just about any trip (I like to have options), it has long been my policy to wear the bulkiest pair of shoes I’m bringing on the plane. In my earlier life, when I had more energy than interest in fashion, this was generally my hiking boots, putting me ahead of the curve in the taking-your-shoes-off-at-security trend, due to the steel reinforcement, but more recently it has become boots of a less functional sort.

Which has led to a few incidents of me sprinting barefoot through various airports, because I tend to cut it kind of close when it comes to air travel, if by “close” you mean “with enough time to catch the plane or put my boots back on, but not both.” Also, I can run faster that way.

At any rate, on a recent trip to Canada I managed to keep these boots on for long enough to get on the plane, but took them off as soon as I was seated, because who wants to keep their shoes on for six hours? Though I do tend to reconsider this strategy when I have to visit the airplane bathroom. But, aside from that, and the fact that they took up a fair amount of the space under the seat in front of me, I thought this was a fine idea. Until it came time to put them back on.

It turns out my feet swell on long plane trips. In fact, they swell a lot. They blow up like little balloons with toes. I don’t know how I didn’t notice this before; either it’s a new development or I had never worn shoes where it was a problem before.

It was a problem.

I don’t know if you can tell, but these boots do not have side zippers. They are in the “pull-on” style which, if your feet have swollen a bit, is more the “pull, and pull, and swear and stomp, all while stuck in your cramped airplane seat” style. It was like trying to stuff an angry blowfish into a sausage casing.

Unfortunately, not putting them on wasn’t an option. I was in Canada, and you wear shoes there. So I stomped and tugged and crammed, and eventually forced my balloon-feet into the boots. But it was definitely a learning experience: Next time, I’m packing smaller feet.

1 thought on “Shoesday: Boots on a Plane”