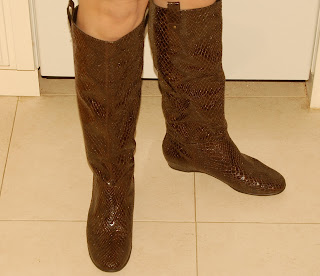 Confession time: What I really wanted were these boots. Why don’t I own them? Well, as absurd and unrestrained as my shoe spending may be to some* people, it does not actually extend to paying nearly eight hundred dollars for a pair of boots. I know, it’s tragic. At any rate, since I am someone who Will Not Be Denied, I did not give up, I merely sought alternatives. Which is why, when Aerosoles put all of their boots on an additional thirty percent off, bringing the price of this pair down to the aforementioned thirty-five dollars. And yeah, they are kind of shiny, and made of fabric with fake scales glued on, and generally less overwhelmingly fabulous. On the other hand, for 4.5% of the price, I think I can live with that.

2 thoughts on “Shoesday: You Can’t Always Get What You Want”