It has now been officially too long for me to continue blogging about the Japan trip, which is probably for the best, really. Not that the trip wasn’t great and fascinating, but I think one of the reasons* I never finished writing about it was that my posts were devolving into, “we went here and it was cool, we ate this and it was delicious, you wouldn’t believe the things they have in toy vending machines in Akihabara**.” But there is one good story from that trip that I really think needs to be told, if only for its cross-cultural strangeness. 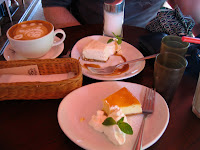 Tokyo, despite its warm summers, is not exactly overrun with outdoor cafes. But we did find one, on Omotesandō in Harajuku, a street that would be considered a city’s major shopping corridor, if that city was not Tokyo. The cafe was on the second floor, overlooking the sidewalk on a block between two major subway stops, and serving a variety of cheesecakes and lattes with pictures drawn in the foam. 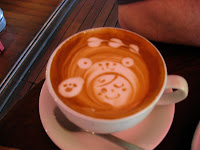 We got a table at the edge of the patio, where we had a good view of the street below.

There was a lot to see.

For the most part, it was what we were coming to recognize as the normal Tokyo street scene– kids in school uniforms, pairs of girls in matching outfits. young men in loud plaids with dyed and gelled hairstyles, office workers in suits, the occasional teen girl dressed as Strawberry Shortcake or a reasonable facsimile thereof– everyone on the move. But after we had been sitting there for a while, a few anomalies began to emerge. There was the nicely-dressed woman who came out of the train station and stood by the curb, looking up and down the sidewalk, clearly waiting for someone who never came, and who eventually gave up and went back down into the station. And the young mother who let her small son, dressed in a sort of watermelon costume, stop to pee in one of the planters. There were the guys handing out packets of tissues printed with advertising slogans (popular apparently because toilet paper was uncommon in public bathrooms, according to the guidebook, though it was not a problem we ever had***). And there was the man in the gray suit.

He was standing off to the side of the sidewalk, which was fairly wide. A young man, maybe in his late twenties or early thirties,**** well groomed and reasonably attractive. His suit, it turned out, was not actually gray, more of a fine black-and-white check, three pieces and well-fitted. He would stand there, sometimes for quite a while, and then, picking someone out of the crowd, he would move in.

It was always a woman, and she was always alone. Mid-twenties to late thirties, not too trendy or too professional-looking. Not on her phone or walking like she had to get somewhere. (After a while, we started looking ahead up the street, trying to guess which ones he would go for, based on his apparent criteria.) When he spotted one, he would join the flow of the people, walking fast enough to come up and fall into step with her. He would greet her, apparently introduce himself and then, most of the time, get the brush-off and reset to start again.

Every once in a while, he would get one to stop and listen to him. If she stayed for long enough, he would take an accordion-folded pamphlet or photo strip (or something) out of his pocket and show it to her, talking very seriously the whole time. She would nod, and look serious too, but he would do almost all of the talking.

Mostly the exchanges only went on for a minute or two, though he got one to stay for close to ten minutes, just talking. At the end of a successful exchange, they would both bow, he would hand her a business card and she would walk on. And he would set himself back up– usually in a slightly different spot– and do it again.

We had all sorts of theories as to what was going on. Panhandling, at first, because when a someone is approaching random strangers on the street, what they generally want is money. But if he was, then he was the only one in Tokyo, and he wasn’t very good at it, seeing as no one ever gave him anything. We also thought he might have been agitating for some cause– just a little further up the same block some earnest young people were doing the petition-and-collection-box thing for earthquake victims. But he wasn’t handing out pamphlets or asking anyone to sign anything, and why, in that case, would he be focusing on young women? I was big on the con artist theory; that he was spinning some story to these people, complete with heartwarming pictures or evidence of some sort. Letting them just walk away seemed a little odd and ineffective, and it still didn’t make sense why they all had to be women, but maybe they do cons differently in Japan.

It wasn’t a perfect theory, but its best competition was that it was a technique for getting over a fear of speaking to strangers. Which, while no less outlandish, makes for less of a story.

We went back to the same cafe a few days later.***** We hoped to see the man there again, but he never made an appearance. Someone else did, however, and finally threw some light on our questions. Which, in a way, was almost too bad.

WARNING: Do Not Read Past This Point If You Don’t Want This Story To Get A Lot Less Interesting

The new guy was working about the same section of sidewalk as Gray Suit had before. He was older, with long, frizzy thinning hair and oversized, skinny shoes that turned up at the ends. And around his waist he was wearing a short apron with pockets full of hairdressing tools. That was when we remembered the other thing we had noticed about this area: that it was absolutely lousy with hairdressers, five or ten shops to a block in some places. There was even one connected to the cafe. There was no con here, no terminally shy guy working through his fears. Just a striving stylist with a wallet full of haircut pictures and a good eye for a potential customer.

I suppose I should be relieved. I mean, I don’t want nice people getting conned. But, well, it would have been a better story.

*Well behind “lazy.”
**I mean, if you’re old enough for that sort of thing, aren’t you a little old to be collecting plastic figurines?
***Though it did end up coming in handy at one point in the Bloomingdales in the city.
****Shut up, that totally still counts as “young.”
*****This was towards the end of the trip and we were somewhat run down. Or hotel, which was very cool and Japanese and surprisingly affordable, unfortunately had a bed that was so hard that neither of us was sleeping very well. Which meant that, as the trip went on, we spent a lot less time bouncing from one place of interest to the next, and more time sitting around having snacks.