As has been widely pointed out, this season of American Idol has been kind of tragic. So, clearly, what they need is some new shoes. That should fix everything.

(I am also offering song suggestions, though since next week’s theme is R&B my depth of knowledge is not that great. But I am trying to limit myself to the last thirty years, which is something the contestants haven’t seemed to have managed very well.) 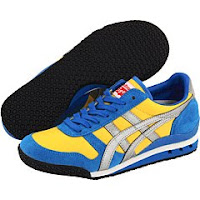 This season has been somewhat overrun by young, male pseudo-heartthrobs of variable singing ability. And while Aaron does vary somewhat more towards actually having some, he has a distressing tendency towards big country ballads, which don’t really suit his stature, or any enterprising producers hoping to turn him in to the latest in the recent stream of teenybopper cash machines. So I am offering these shoes as not only some good-looking shoes, but also as part of a bigger, youthifying makeover, which also includes the suggestion of a song that those putative teen fans might actually buy to listen to on their ipods while they fantasize about the inevitable day when he takes them to Winter Formal.

Song: “In My Head,” Jason Derulo 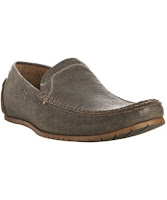 For this year’s former-gangbanger-turned-acoustic-strummer-with-neck-tattoo (aren’t you sick of the type?), I am suggesting an understated but still kind of stylish loafer, to be worn sans sock, of course, while trying to recapture his one good moment on the show so far, when he sang a brilliant acoustic version of Ms. Abdul’s “Straight Up” in the Hollywood round. He won’t be able to, but at least he can have some shoes he can wear to job interviews after the show is over. 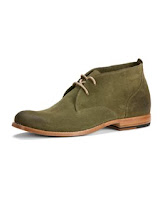 For the guy in the “laid-back-hunk” role, I like the idea of a Chukka boot, the better to stroll around the stage while strumming on his guitar and singing with, if not a whole lot of energy, at least the awareness that he is a performer on a stage and a general grasp of the notes.

For this season, that’s big. 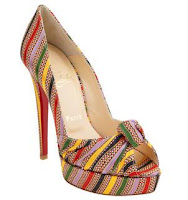 Issues of vocal ability aside, there just aren’t a lot of people in this season who you could actually see as singing stars. I mean, you can look at their individual performances on the Idol stage, and you can say, “they did this and that well,” but as for actually imagining them creating albums and headlining shows, it takes some stretching of the imagination.

Crystal is not one of those people. She clearly has a very good sense of who she is and what she wants to be, and she backs it up with singing ability and stage presence. I’m not sure she would be quite such a dominant force in a stronger season (in the days of the BattleDivas, she might have come off as a bit to subtle), but in these days of scarcity she is extremely welcome. My only suggestion is that she step up her style a bit– keep the relaxed earth-mama look, but add some more dramatic touches and more upscale items. I like these for the way they reference Rastafarian colors for Our Lady of the White Girl Dreads, with out taking it too literal. 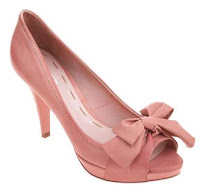 I don’t have any big justification for these. They’re so pretty! She’s so pretty! And kind of underrated, I think. It’s rare for Idol that the prettiest girl in the finals is also one of the most talented, so here’s hoping she doesn’t end up feeling like she needs to pull a Haley Scarnato and dress in increasingly tiny outfits every week. 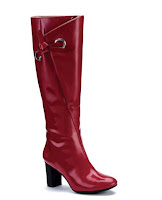 I’m sorry, I just don’t have anything useful to say about this year’s robot pageant princess. But I really like these boots (they’re waterproof!) and am seriously considering getting them in the black. Because as much as I like the red, I just think they’re a little too superhero for everyday. Unless every day you are Wonder Woman. Of which seventeen-year-old Katie is neither wonder or woman, but hey, shiny! 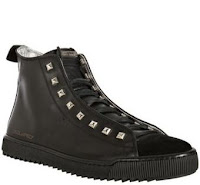 To paraphrase Voltaire**, “If a rocker did not exist, it would be necessary for the American Idol producers to invent one.” This year, in the absence of a stronger alternative, Lee here has landed the label, and he’s doing a decent enough job with it. Not enough to merit some real rock and roll shoes, but good enough for a somewhat toned-down alternative. 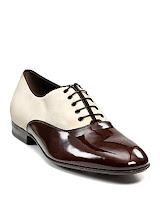 Big Mike is big. Big guy, big voice, big cheesy hand movements while he’s singing the big songs. I don’t think there’s any way to reasonable expect him to tone it down, so I figured the best thing to do was to take it the other direction and find him some big (in terms of boldness of style) shoes. 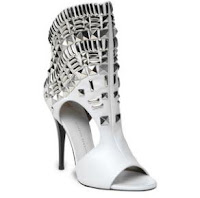 Who doesn’t love the little glassblower with the lungs of steel? She’s made a name for herself being a little quirky, a little spacey, and shrieking into one giant note at the end of every song she sings. Which is cool, and it’s her, and I certainly couldn’t do it; but I think it’s time that she took a break from treating every song as if were her audition to play Siryn in the next X-Men movie. Perhaps it’s time to let her shoes do the shouting for her? 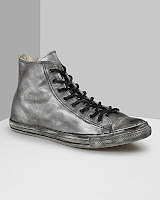 See Aaron Kelly, above, remove all references to vocal competence. Honestly, the kid must be coated in teflon, he’s slipped through so often. But, failing that, I am offering some really cool shoes as a distraction. You’ve got to admit, they’ll look pretty nice doing totally unnecessary slides across the stage, and when he executes an ill-advised stage dive into the audience and the small and confused girls they put in the front row drop him on his head, the shininess will help the stagehands find him before he gets torn to bits.