Another day, another labored portmanteau word. 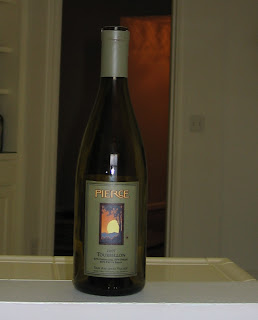 I don’t like wine quite as much as shoes (this is a good thing, for many obvious reasons), but I am rather fond of it. So, I thought, why not write about it? I mean, aside from the fact that I know very little about wine writing, and while tasting I tend to make things up, like “nuances of chalk” and “I’m getting pretzels on the nose*”. But no matter. No one’s going to go out and buy something because I wrote about it, so I figure I can just go ahead and say whatever.

So, Pierce Tourbillion. Vital statistics: 43% grenache, 37% Syrah, 20% petite syrah. Color: red. Consumed with: various leftovers, while sitting out on the balcony on a sunny Sunday, reading and enjoying the view of the Wheel Works across the street. Tasting notes: Medium-bodied, easy on the tannins. Good afternoon wine. Pairs well with an early Terry Pratchett.

Purchased: At the Pierce tasting room in Monterey, found entirely by accident when we were looking for another place (chosen at random) that we later learned to have closed. But it was late and parking near Cannery Row was expensive, so when we saw that this place was open we decided to give it a try. And as random decisions go, this was one of the better ones, because the wines were delicious and interesting and reasonably priced, and the guy running the tasting room (who turned out to be the son of the owners) was friendly and knowledgeable. Plus, I came up with a tagline for one of their other wines**, of which I am fairly proud. I also gave a moderately tipsy*** lecture on the use of twitter as a social networking tool, from the point of view of the consumer, of which I am less proud, if only for the length of it.

But, such is wine.

*Actual statement, not related to snackfood-tossing.
** More on that later.
***It was a good tasting room, and I am a lightweight.