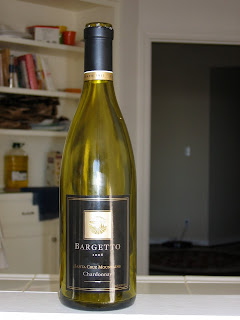 Actually, that’s really not fair; it isn’t a particularly big or aggressive wine at all. Not too sharp, not overly buttery, pairs excellently with an evening sitting around watching terrible, terrible movies on the SciFi* channel. Cameron was away for the weekend, living the high life** in Vegas for his friend’s bachelor party, which meant it was two days of sourdough baguette, white wine and execrable acting***. On Saturday we had Mega Shark vs Giant Octopus, and then Mega Piranha (one can only assume that Giga Jellyfish is in preproduction as we speak) and Sunday featured various parts of America being destroyed by a meteor, a volcano and weather. I don’t think I have ever heard the phrase, “We’ve got to get out of here,” said with such frequency.

So, in conclusion: Bargetto Chardonnay: Much better at being a chardonnay than former pop star Tiffany is at acting. Try some, and just tell me I’m wrong.

Speaking of movies, have you ever wondered what it would be like if someone tried to remake The Birds with community theater actors, a Mad Libs-level script and five dollars for special effects? Well, wonder no more. I present: Birdemic

I think we’re gonna need a bigger wine bottle. Or a couple more regular ones. That would work too.

*Yes, I know they changed their name to make it stupider. I just refuse to acknowledge it, on the principle that, eventually, reality will bend to my will and it will change back.
**Non-Miller.
***Done by Lorenzo Lamas and Former Pop Star Tiffany, among others. Not by me. I was the one eating the baguette.