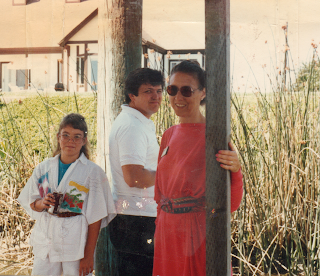 Every once in a while, when I feel like maybe I am getting a little too judgemental about other people’s clothing choices, I like post a little reminder of my own shameful history in fashion. I would defend myself by saying it was the eighties, and people did things like this, but the fact that Mom is right there looking effortlessly chic would tend to weaken that argument*. The only good thing I can think of to say about that shirt is that I remember wearing it once as a volunteer at the Lawrence Hall of Science “biolab,” where there were a variety of animals for the visitors to handle, and a boa constrictor (Ms. Boa, I believe) that I was showing to some visitors climbed in one sleeve, around my back and out the other, so that the head and tail were hanging out of opposite sleeves. So, there’s that.

Also, in my defense I would like to point out that it only looks like I have a mullet– it was really just bad layering and a half-ponytail.

*I should note that she should not get the blame here; then, as now, I was somewhat difficult to argue out of an idea.