This week’s Shoefinder goes out to Tabitha* who will not actually be wearing any of them. This is because she has mean feet that will not let her wear shoes that do not supply excellent comfort and support, and let’s face it, that’s really not what we specialize in around here.

And, loathe as I am to admit it, sometimes the pretty shoes are not the ones you can comfortably spend the day running up and down stairs in. I will even confess that there have been times when I have gotten home after a triumphant evening in one of my own favorite pairs and felt the need to take them off with less reverence than haste. 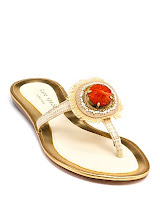 Of course, there’s more than one way to skin a foot. Flats seem like they should be innocent; after all, they’re flat. Feet are supposed to be flat, barring Barbies, it’s how they’re built. But sometimes, especially in the case of sandals, the appearance of comfort can be deceiving. In heels, though, some sort of construction has to go into the soles, for practical purposes, but there are no such requirements for sandals.  A piece of leather, a few straps to hold it on and ta-da: a shoe! And it can be a very pretty shoe, a shoe that would be perfect for strolling along the beach in a French resort town, but you would have to take regular breaks to sit in cafes and sip things, because the soles of your feet would be sore and the skin between your toes would be just about rubbed through. On the other hand, no one would ever suspect you were an American tourist, unless you were visibly limping. 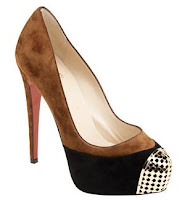 Then we have your more obvious sources of discomfort. There is no denying that these are beautiful, the sort of thing a dangerous lady spy** would wear if she suspected her enemies would try to crush her feet with concealed anvils– the world’s most glamorous toe-caps. But, while she might get some use out of a high kick to the face to take out a henchman’s eye, her balance would be severely compromised, and the risk of stumbling into the piranha tank too high for them to ever have any practical use in the field. 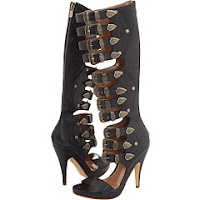 And there are different kinds of discomfort. For example there are the cramps you would have in your fingers by the time you had finished putting on these, not to mention the awkwardness of the conversations you would have while wearing them, when the other person was under the impression that you were employed in providing certain, very specific services, and you didn’t figure out what they were thinking until after you had said something that could be wildly misinterpreted.

But is there any hope at all? Of course there is. There are fine people like the designers at Taryn Rose, a shoe company founded by a former foot surgeon that prides itself on designing shoes on the principle of doing no harm. Of course, some of their products look exactly like you would expect, which is to say, ugly with a side of old lady shoes. (Seriously, do those come with support hose?) But there are a few— and they are not cheap, but they do exist– that make me wonder if there might be something to this “comfort” thing after all. 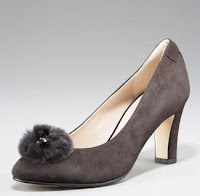 *No picture, but I can tell you a story: A few years ago Tabitha and I went to see Terry Pratchett (a shared favorite author) do a reading in Berkeley. Afterwards, we went to get our books signed and when we made it to the front of the line the author, as authors do, looked at the sticky note on the front of Tabitha’s book and said something complimentary about her name. Tabitha made a self-deprecating response about it being the sort of thing people name their cats, and I chimed in with, “At least it isn’t something people name cows.” And Terry Pratchett said, “Oh, is your name Daisy?” And I said, “yes.”
**Or dedicated and relatively small-footed female impersonator.