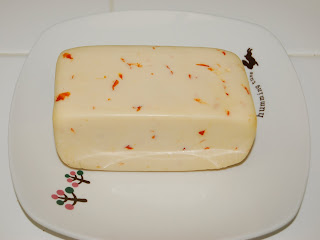 Your standard mild havarti, spiked with bits of peppadew peppers, a variety specific to South Africa. Very sweet, noticeably spicy in their straight form, they don’t dominate the cheese so much as add a touch of piquancy.

Chicken with stuff, Mexicanish Edition (with couscous and a mixed-greens salad) 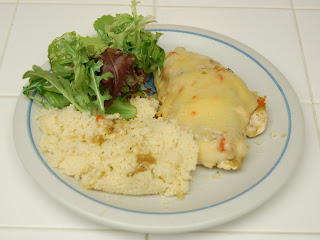 The “recipe” is loosely adapted from one in Sunset, approximating a chicken cordon bleu by taking pan-cooked chicken breasts, topping them with ham and cheese and finishing them in the oven. I’ve been taking the idea and running with it, because once you’ve topped a chicken breast with one combination of flavoring/cheese, it quickly becomes clear that there’s no reason to stop there. Tonight’s combination is the aforementioned havarti over green tomatillo salsa (which is, I realize, the only thing even vaguely Mexican about this dish), with chopped peppadews added to the salsa. (See? I got all the colors of the Mexican flag in there! It almost works. . .)