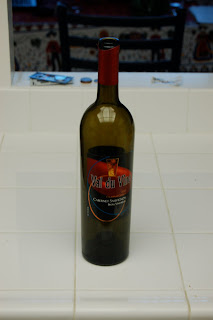 I think I mentioned that a couple of weeks ago Cameron and I took off for a long weekend in Murphy’s, our favorite winery-infested town in the Sierra Foothills. We were lucky enough to catch one of the few outright-beautiful series of days in this strange and damp spring, and we divided our time between  visiting tasting rooms up and down Main Street (a distance of about five blocks) and sitting out on the porch of the rental cottage, reading and drinking our finds. The only real downside was that the cottage didn’t have cable, and since Murphy’s isn’t much of a nightlife place (the restaurants, we discovered, tend to close around eight), we were left with the network offerings on TV. And all the good movies were in Spanish*.

We really shouldn’t have been surprised by that, because for all it’s having of some nice restaurants and a place where you can buy fancy olive oils, Murphy’s is at its heart a small town. We saw one aspect of that on Saturday night, walking back from dinner past the hall of the local chapter of the Native Sons of the Golden West, which was entirely packed with people. The doors and windows were all open and inside a band was playing and there seemed to be something going on up on the main stage. Someone was selling tickets at the door, but I didn’t get up the nerve to go over and ask what was going on. We found out the next day that it was a benefit for a local man who had been diagnosed with leukemia, and they were raising money to help pay his expenses. Apparently, there had also been a bake sale.

On the other hand, the place isn’t all small-town charm and togetherness: At dinner that night we were seated near a bachelorette party from Modesto, who were having fun with the grim determination of women who haven’t seen the near side of twenty in quite a while, but haven’t let that information reach the part of the brain that picks their clothes.**

But the best small-town moment, and the one that actually brings me back around to the subject of this post, was when we went to the winery mentioned here and bought a few bottles of wine. Or, rather, after that, when we got home later that afternoon from our wanderings and found a bottle and a note at the door. The note was from one of the people at the winery, who realized that they had given us the wrong bottle in our purchase (a Mourvedre, I think) instead of the Cabernet Sauvignon we had bought. The bottle was our replacement Cab, and the note said to just leave the other (wrong) bottle with our rental agent, who conveniently lived next to the cottage and was a friend of the winemakers. The whole incident just warmed my cynical, big-suburb heart, all the more for the fact that it really is a very nice wine.

*Fun fact: I retain enough knowledge of the Spanish language from high school to be able to mostly understand what’s going on in Lost Boys.
**Actual quote I overheard, “Well, I had to try botox. Everyone else was doing it.”