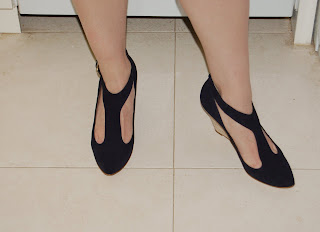 I mean, I won’t, because I am a tough and battle-hardened blogger who is totally above that sort of thing. But I could.

These shoes are the crown jewels of my New York acquisition-spree, purchased at the Sigerson Morrison store, where I was helped by (by his own admission) the only gay man in New York who had never been to San Francisco. I told him he should visit; he would like it here. After all, the residents have excellent taste in shoes.

p.s. It doesn’t show up very well in the picture, but the shoes are actually a gorgeous shade of navy blue, which makes them even more awesome than you thought they were.

6 thoughts on “Shoesday: So Awesome I Could Cry”