Let’s talk about pants. In general, I’m a fan. They are frequently flattering, keep your legs warm and leave you free from the fears associated with skirts and windy days. But sometimes, at the hands of an over-ambitious designer who has confused the concepts of “innovation” and “crackhead stupidity,” pants can go horribly, horribly wrong.

This is one of those times.

This item was being sold at Barney’s in New York, as pants. Which, technically, I suppose they are, what with their leg-covering properties and all. But on closer inspection, they prove to be both more and less than that. More because they include components of at least three different pants in one, and less because they are just so incredibly stupid.

Starting from the top: Which is sweatpants, or at least a portion thereof. Now, sweatpants are fine things; exceptionally comfy and perfect for those days when buttons and zippers just seem like too much work. But in this Frankenpants situation we only get part of the sweatpants– the top part, to be specific– grafted on to a heavy, almost-denim fabric with a pointless, asymmetrical button and inexplicable beltloops*.

From there we proceed to the crotch: 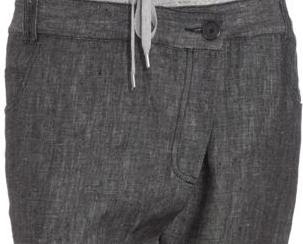 Which is dropped, of course. Because when you are dressed in the finest mixed-material, inexplicably-beltlooped Frankenpants money can buy, the last thing you want is to not look like you’re wearing a diaper.
And now, the back: 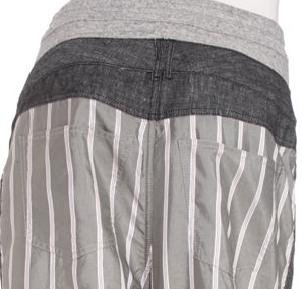 Which, if you can’t tell, is made of the material normally used for lining things like suit jackets. These pants are like a mullet, except instead of being party in the front and business in the back, they’re stupid in the front and crazy in the back.

Oh, and before I forget, the bottom: 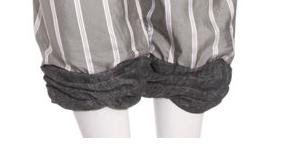 Cropped, rolled and bunched, for that insouciant “my kitchen flooded and I had to wade in and save the toaster oven and I forgot to roll my asymmetrical mullet Frankenpants back down” look.

At the time that Lisa and I encountered these pants, I was on the fence about buying a (very cool) coat at the same store. I was actually carrying the coat with me when we examined them, but the pants– their very existence and the fact that the store was actually attempting to sell them for $455 (shockingly, they have since been marked down)– offended me so much that I couldn’t bring myself to make a purchase, and I left the coat hanging there on the rack, so that the pants might know what they had done, and be ashamed.

*”Inexplicable Beltloops” is what I am going to name my alt-country band, when I have one.

3 thoughts on “Whinesday: The World’s Most Irritating Pants”