For dinner on the Monday I was in New York we (“we” being myself and the VanCorvies of Murray Hill) went to a restaurant that takes its cheese plate seriously. How seriously? Well, here’s the cheese menu: 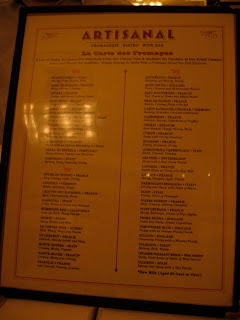 I didn’t get up to go examine the cheese table, but fortunately I didn’t have to, because there was a mirror over it that was angled so that the entire dining room could gaze in wonder.

Obviously, “one of everything” was not going to be a reasonable order, so we limited ourselves to four, with some quince paste*. And, once I was forced to admit that I only recognized one cheese on the menu, we let the on-staff expert do the choosing for us, with the specifications of no goat cheese and  one blue.

Here’s what we got: 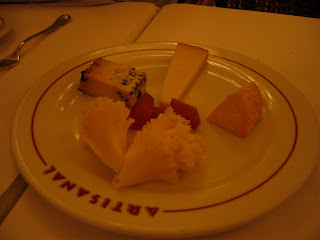 Clockwise from the top we have:

Etorki– Sheep’s milk cheese from France. Described on the cheese menu as “compliant, sweet, chewy.” Only one of those adjectives should be used by reasonable people to describe cheese. Described by diners** as “smooth, mild,” “nice with quince paste but overpowered by it” and “really nice version of laughing cow”. (That last one was mine.) Ryan pointed out that as you got closer to the rind, it came across as more like a mild manchego, and chose this as his favorite.

Langres– Cow’s milk, France. “Like affinois, but better” (me again). “Creamy, buttery, rich, mild.” In a close contest, it was my top choice.

Tete de Moine– Cow again, this time from Switzerland. Cut so that it came in little ruffled cones. It drew comments like “subtle,” “different,” and “meaty?” and a discussion as to whether there was a hint of mushroom in the flavor, but in a good way. The quince paste really proved itself with this one, making the cheese taste creamier in combination. Lisa liked this one best.

Valdeon– Source unknown (either sheep or cow, as the goat had been helpfully crossed out on the take-away menu the waiter gave me), from Spain. A serious blue. We had some trouble finishing this one; it got kind of foul towards the rind. The only cheese that there was anything left of in the end, though even that wasn’t much. From Ryan, the quote of the night:

“Tastes like my grandpa’s basement, but in a good way.”

*Quince paste will be discussed here at a later date.
**I took notes!