Skip to content
Because sometimes, even cheese needs to accessorize. 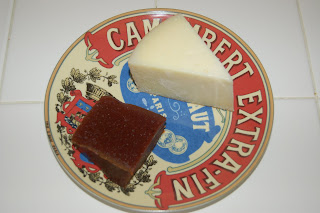 Manchego: a hard sheep’s milk cheese from Spain, with a mild, creamy flavor and a highish salt content.

Quince paste: A, um, paste made of quinces? Quincci? Quoonce? Okay, yeah, I don’t know. Let’s just do what everybody does when they don’t know something on the internet: type in all caps on message boards.

Or we could look it up in Wikipedia. That might work too.

According to that august authority, quince paste is:


“Quince cheese [I know, but that’s what they call it. This is wikipedia we’re talking about, after all.] is prepared with quince fruits. The fruit is cooked with sugar,[5] and turns red after a long cooking time and becomes a relatively firm, quince tart, dense enough to hold its shape. The taste is sweet but slightly astringent.”

“The quince is a hard, golden yellow fruit. The fruit was known to the Akkadians, who called it supurgillu.”

So, yes, a tart, inedible when raw, yellow fruit known to the ancients as Superglue gets cooked with a lot of sugar, into something that is clearly a jam or jelly or paste, and whoever is writing about it in wikipedia calls it cheese, possibly because the only time they have had it has been on a cheese plate. Oh, internet, whatever did we do without you?