Skip to content
We have another bridal request today, coming from Robin, who lives in Oklahoma City, a place where regular people can simply go and buy houses, without selling a kidney or anything. This frees them up to have a lot of time to pose next to celebrity handprints: 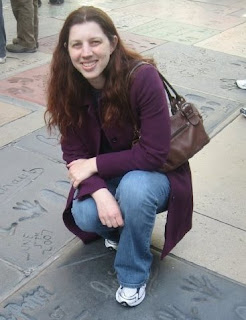 And think about what kinds of shoes they want to wear to their weddings. Which is handy, because Robin is getting married soon, and she has feet.

This is were I come in.

The request was simple: Royal blue flats, not crazy-expensive, no sandals due to a perception of “masculine toes”* and in a shade as close to these as reasonably possible:

I understand the impulse. 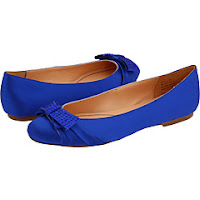 Let’s start with the basics. They’re pretty, they’re blue, they’re satin. They even have some sparklies on the toes. Do they thrill me to my very core? Maybe not, but they would look lovely peeking out from under a long white dress, and the leather construction probably means they’re sturdy enough not to fall apart halfway through the reception. 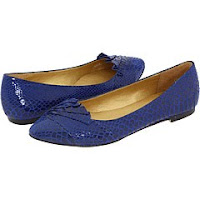 The other name for this color that shoe designers like to use– for those of you who are doing a search on your own– is cobalt (which is, technically, slightly darker than royal blue, but we’re talking about an industry where camelot is a color, so let’s give them some leeway here). Case in point are these, a slightly funkier option in snakeskin-embossed leather (the real thing would also be awesome, but would cost about seven times as much). The nice thing about these is that they could easily transition into being everyday flats, post-wedding, which is more than you can say for most of the things one spends one’s money on for that occasion. 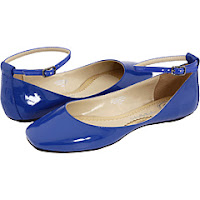 Speaking of spending money (or avoiding same), these are on sale, and very cute for the price. Plus they come in wide widths, as specifically requested! And the ankle strap would be handy protection against the dreaded take-too-big-a-step-going-down-the-aisle-and-kick-your-shoe-off-into-your-new-grandmother-in-law’s-face syndrome, which I just made up. 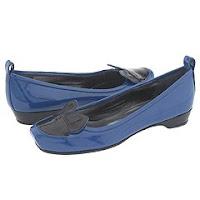 Now, let’s take a break from the serious suggestions and engage in a little silliness. Am I honestly suggesting that Robin walk down the aisle in loafers than look like blue mice, or possibly bunnies? Of course not. Would I be at all unhappy if she did? If every step she took, little black ears peeked out from under her skirt? 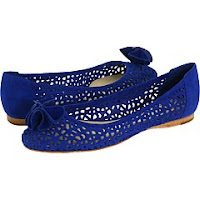 Back here on earth, though, we still have some options to consider. These don’t quite count as sandals, I think, because the closed shape would keep any offending toes well under wraps, but they’re light and airy enough for a warm day. Plus, I think the rosette adds just about the right amount of whimsy, without being mouse ears. (Not that there’s anything wrong with mouse ears. 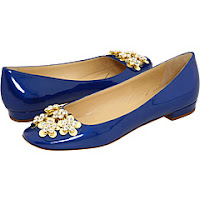 And then we come to my personal favorite and first choice among the selections: the Kate Spade Nicolina. They’re shiny! They’re sparkly! With flowers! How could you not love them? Yes, they are a bit on the pricier side, but let’s think about this: like I said before, this is the one part of the wedding outfit that you’re likely to get more use out of down the line (unless yours is a social life that calls for the regular wearing of veils), so it makes sense, to me, to spend a little less on the dress and buy yourself some really nice shoes to go with it. After all, this is a day to be focusing on what’s really important in your life, isn’t it?

*Hey, she said I could quote her.