(For best results, please listen to this song while reading the following.) 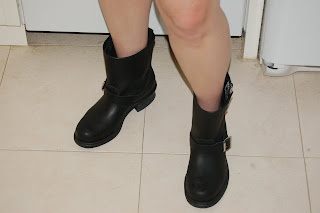 I almost didn’t buy these boots. Not that I didn’t want them– I did, because they’re awesome– but because I just wasn’t sure that someone with my near-total lack of badass qualities would be able to wear them convincingly. It would be like back when I had my old car, a deeply beloved if somewhat maintenance-challenged bright yellow 1977 Porcshe 924, and someone told me that it didn’t deserve to be that color, because it was an automatic. It had me worried; can someone who doesn’t know how to drive a stick shift* really claim the right to put on big black stompy boots? But then I decided, maybe that river flows both ways.** Maybe, by wearing the boots, they would confer some of their properties on me, and I would become the hard-rocking, butt-kicking individual I always knew I wasn’t.

That was the plan, anyway. It hasn’t exactly happened yet, but these boots are built to last the ages, so I figure I have some time.

Also, they’re cute with a skirt.

*The closest I ever came was when I was taking the CHP motorcycle class, so I could get a license for the scooter I had for commuting to grad school, and I got so confused by the whole brake/clutch/shift thing that I finally just gave up and fell off. I was only going about three miles an hour, so it wasn’t a big deal, but I wasn’t encouraged by the experience.
**Or something. Work with me here.