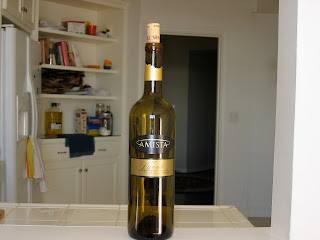 Taste is a funny thing. I don’t mean in the way that makes some people think that this is a good idea for an outfit, although that’s not without its entertainment value. But right now we’re talking about the sense (one of five– collect them all!), and the way perception influences it.

We first tasted this wine last November, and there was something overwhelmingly familiar about the flavor, but we couldn’t figure out what it was. Then, and I don’t know if it was the influence of the season or not, but one particular association sprang to mind, and once it was there I just couldn’t shake it.

Cameron, wisely, didn’t answer the question, but did agree about the turkey thing. We debated taking it for Thanksgiving dinner, but decided against, because it seemed just too literal, and besides, flavors aside, a syrah seems kind of big for white meat. So we put the other bottles on the shelf (it was part of a wine club shipment) and didn’t break it out again until months later. The flavor was still there, and it was still turkey, and we were still stumped. It’s not something that usually shows up in tasting notes, after all.

Fortunately, Cameron’s wine-expert friend Ken was on hand to explain. It turns out that there is a variety of yeast called Brettanomyces (Brett for short) that can produce flavors described as, among other things, “horsey, wet dog, stale hamburger, and similar to Belgian Lambic beer.”

They didn’t mention turkey, but I think we can just put that down to my highly refined palate.