(Apologies for the wonky text formatting in this post; the new blogger photo thing is being entirely obnoxious.) 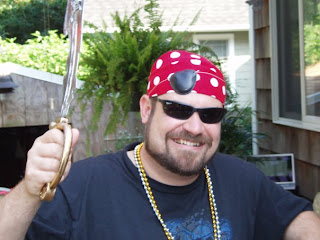 Something new this week: Our first ever pirate! Also, he’s a dude.

David is not looking for any shoes in particular, just “interesting ones” and he does have some parameters. Specifically, that along with being interesting, they also be tasteful, versatile and comfortable, and no tassels*. He also mentioned that he prefers slip-ons, but I didn’t see that part until I had already mostly put together the list, so I’m just going ahead and ignoring it. Also most of the other stuff, except for the bit about the tassels. 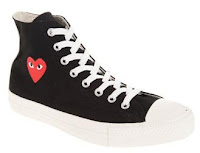 First example of the laces thing: these shoes. But come on, I mean, they’re Chuck Taylors with an angry heart. A fashiony angry heart.
Don’t get me wrong, there is absolutely nothing wrong with the classic Chucks— they’re called classic for a reason– but this is Shoefinder, and around here we don’t just tell you what you already know. We tell you that you need shoes with angry hearts on them. 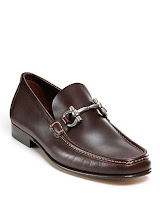 Speaking of classic, there’s a reason “interesting” men’s shoes look more like this and less like this. It’s the quality and the details that are important, not the over-the-top mad fabulousness and potential qualities as an offensive weapon. Which is why I am including these, and not just because they’re Ferragamos. Okay, mostly that. 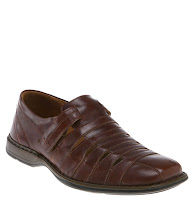 On an entirely unrelated subject, the manufacturer of these shoes is calling them sandals. Which strikes me as being a little like calling these “shorts.” They look more like capris to me. Regardless, whether they’re extremely modest sandals or well-ventilated shoes, I think they look kind of cool. 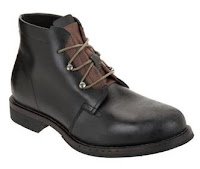 I think these boots are great. They have an excellent somewhat-retro masculinity, durable without crossing the line into big stompy boot territory, which can run the risk of making you look like you’re dressing up as a mid-eighties punk when you’re not. (If you are, then never mind, carry on.) The name suggests that they are a reissue of some earlier model; I don’t know anything about that, but I assume they date to a time before Timberland got carried away with the fact that a hip hop producer and started selling stuff like this. 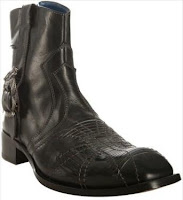 These are boots too, and they’re cool in a different way. Actually, I’m not crazy about that side buckle (too big), but I like the stitching on the front because I think it looks like a spiderweb. Spiders are cool. 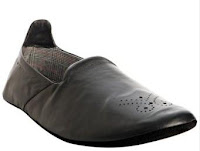 Initially, when I saw these I thought they were a candidate for the big pile of no folder. But then I realized that they were slippers that are styled to look like wingtips and that was really kind of awesome and I actually wanted some for myself, if only they were available in my size. (They aren’t.)

Finally, a lesson about logos. Here we have two pairs of white sneakers. One has the logo thing done in a clever, blatant-but-not-obnoxious way**, while the other is nothing more than a way to tell the world, “Hey, World, I spent three hundred and sixty-four dollars on this pair of sneakers.” Don’t be that dude.

*RIP Rue.
**As all opinions presented here, this is entirely subjective, but still correct.