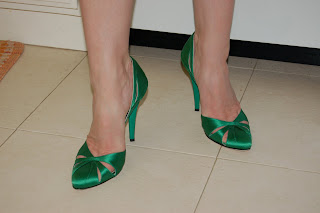 Sometimes things just come together. Like when the man my dad was emailing with about some radiation product development turned out to be the husband of my beloved kindergarten teacher, who not only remembered me and my brother, but also that he was interested in numbers and I loved the Narnia books (I was fairly convinced that I was Lucy). My memories of that phase of my academic career are understandably vague, but I do remember some paper dolls we had in the classroom, with hard cardboard backings so we wouldn’t destroy them too quickly, and stuffed felt animals in the shape of all the letters in the alphabet. My favorite was the worm that made the “i” which probably explains how I ended up being a blogger.

None of this really has much to do with these shoes, though I suppose it was serendipitous that the last pair they had at eighty-percent off was in my size, and I came across them at a time when I had had just enough margaritas to be impulsive, but that’s not really the same thing at all.