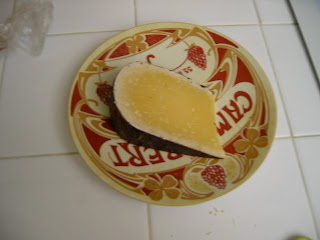 Because I thought I did, but I had never heard of a dry Monterey Jack cheese before. I’ve always thought of Monterey Jack as one of the default cheeses; inoffensive on a sandwich, deriving its main source of excitement from the occasional addition of brightly-colored pepper bits. It never occurred to me that it could be taken seriously as a cheese, with aging and a fancy label and everything.

As it turns out, aged dry Monterey Jack is actually quite tasty. Nothing too big or bold, just a mild nuttiness and some salt– if you’d told me it was a relative of Parmesan I would have believed you. (But then, I’m very credulous, and easily led.) It’s made in Sonoma, which strikes me as slightly inappropriate, but convenient, because it means I can include it as a stop on my long-planned North Bay cheese tour, assuming I ever stop planning that and actually get around to doing it. Stay Tuned.