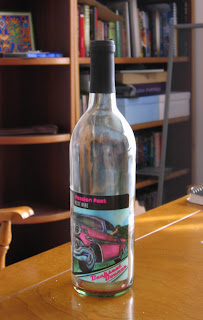 What do you do when you get off a red-eye cross-country flight with a two hour drive between you and your destination? Wine tasting, obviously! It turns out that the Finger Lakes area is positively lousy with wineries, and since we were there it seemed like a shame not to stop and check a few out.

The first place we came across was called “Three Brothers,” named after it’s central marketing trope. Namely, that the winery was owned by three brothers, each of who had a corresponding winery on the property. And, in an amazing strike of business fortune, each of the brothers’ personalities happened to correspond perfectly with a different market segment associated with the wedding parties that, coincidentally, would find plenty of parking available for their busses and limos in the winery’s parking lot. For the parents we had the “traditional” older brother, with a tasting room fitted out in blonde wood and muted accessories, with familiar, if unexceptional, wines on offer. (Including what must have been the lightest Pinot Noir I’ve ever tasted. In related news, I appear to have become a wine snob.) Then, for the bachelorette party, we have brother #2, the “romantic,” who conveniently appears to favor very sweet wines and a tasting room that sold cheap feather boas, that traditional American expression of the sentiment, “Woo! We’re being crazy!” We bought a bottle from this one, the quite drinkable if unfortunately named “Backseat Bounce,” and continued our tour.

The final wine stop of the carefully orchestrated tour was the province of the “badass” brother, a faux-roadhouse perfect for the bachelor party that is not going to get within eighty feet of a stripper if he knows what’s good for him. The lady at the tasting bar asked us where we were from and, when we said California, asked what we thought of the wines. At which point I was able to say, in total honesty, that they were different from what we were used to.

The highlight of the place was, of all things, the on-site microbrewery, presumably there to serve the guests who “aren’t big wine drinkers, if you know what I mean.” I’ve never actually developed much of a taste for the brew, but there were some wheat beers I enjoyed, and Cameron liked the IPA enough that we stopped again on our way back* to pick up a growler of it to take to his friends we went to visit in Canada.**

*Which, being on a weekend, was a fun little excursion to the gates of Hell, with at least one stretch Hummer and several people wearing tiaras.
**Which is quite close to New York, though it takes a while to get there, with traffic.

2 thoughts on “Winesday: “Different From What I’m Used To””