(I couldn’t exactly call this a Shoefinder post because, as you will see, there is so much more than shoes to talk about here.)

On Monday Cameron and I joined what must have been half of all the women in the Bay Area (and very, very few of the men) at Lilith Fair, where we had a fine time and heard lots of excellent music. And, being the shallow and predictable person that I am, I became mildly obsessed with the performers’ outfits, and decided I needed to do a blog post where I showed you pictures of them and how to reproduce their looks on your own. Because, really, what else was I going to do?

(Note: I’m not trying to replicate the outfits perfectly, because that would be too much work. The suggested items are meant to invoke the same style as the original, some more successfully than others.) 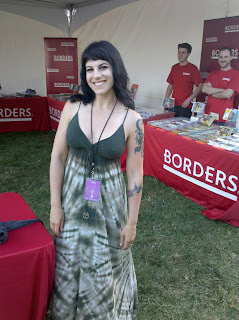 The first person we saw performing (actually, heard before we saw, because the line to get in stretched around the side of the venue to the stage she was on, and by the time we got there she was already into her set) was Terra Naomi, who we had been to see when she played the Bottom of the Hill a few weeks ago. It was actually a pleasant surprise that she was on the lineup for the fair– she hadn’t been when we bought the tickets, but it turned out that she was playing two sets and we ended up seeing both. (Sadly, either because we missed the beginning of the first set or because she decided it wasn’t quite right for the venue, we didn’t get to hear The Vicodin Song, a new addition to my list of favorite really messed-up love songs.)

The Outfit: California-simple, tie-dyed maxi dress with a long necklace and black sandals (not pictured, because I decided that asking her to pick up her skirt so I could get a shot of her shoes crossed the line from “enthusiastic fan” to “creepy fetishist.”) Clearly, the guy in the Borders booth approves. 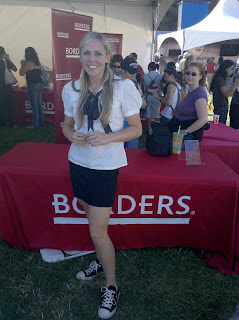 Next up was the band The Submarines, fronted by singer Blake Hazard, who was tremendously nice to me when I came up to take her picture (at the time, she was sitting on the lawn, chatting with fans) even though all I could do was babble nonsensically about my blog and repeat several times “I really liked your performance.” Also, their song Sub Symphonica has a video that is both trippy and adorable, which is quite a feat to pull off.

The Outfit: Indie-feminine (feminindie? no), sailor blouse, black miniskirt and the low-top version of the Comme des Garcons Chucks that I posted on David’s Shoefinder, which are making me think that I need some low-top Chucks of my own, pronto. I kind of like the idea of these, even if they aren’t quite the classics.

I don’t have a photo for the next performer. Or, rather, I do, but it seems to be a blurry shot of my fingers and therefore not terribly useful in this context. I’ll do my best to describe her outfit, but I can’t even find any pictures online so you’ll have to take my word for it.

Marié Digby is best known for her acoustic take on Rhianna’s “Umbrella”, which got her a contract with a major label and a featured spot on the Lilith tour, which isn’t too shabby at all. Also not shabby: her outfit. (Smooth transitions: I has them.)

The Outfit: Light blue sundress, red belt, brown sliver-wedge boots, straw fedora. I thought at first the boots might be the Loeffler Randall ones– and in that case that YouTube video would have served her very well indeed, but based on the fact that they had zippers I’m going to guess not. Either way, she was the picture of the cool hipster chick on a hot day, and it was working for her.

(This post is starting to get a little long, what with all the pictures, so I think I’m going to have to continue it after the jump.) 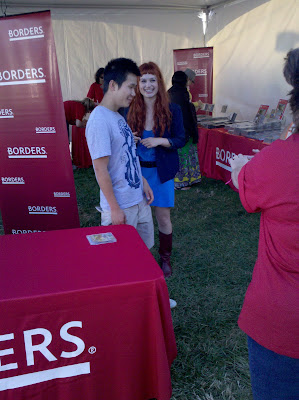 Still with me? Good. This is Allison Sudol of A Fine Frenzy, in the best and, in fact, only close-up picture I could get of her. It’s no reflection on her, just that I didn’t get to her signing until just at the end, and there was a rather terrifying lady at the Borders booth (partially pictured here) who told me on no uncertain terms that she (the singer, not the lady) was done, and the only way I was going to be allowed to take a picture was if I did it while she took the last official picture she was allowing. Which I did, but I haven’t quite figured out how to work the camera on Cameron’s new phone (which I was using for these) and the best I could do was a quick snap as she was walking away. But I think you get the general idea.

The Outfit: She wasn’t wearing the jacket onstage (by the time I took the picture it was nearly dark, and around here that means layers), so the overall look was young and bright and colorful. Blue satin dress, woven black belt, and dark red flat boots. It sounds like it shouldn’t work, but on her it does.

Speaking of things that shouldn’t work, I really wish I had managed to get a picture of Chloe Chaidez of Kitten, but between the facts that we were in the back of the crowd, I still hadn’t mastered the camera and she was flying around the stage like a tiny mad dervish, it just wasn’t happening. Which is a shame, because I would really have liked to have gotten a shot of her singing from on top of the tower of speakers, with the venue employee trying to convince her that she really had to get down from there. Twice. But I would have had to get myself arranged before she ran off to go sing in the crowd, or ride on one of her bandmates’ shoulders, and I simply didn’t have the skills for it. Fortunately, I do have the skills for describing her clothes, which is what I am going to do for you right now.

The Outfit: Floral romper, black tights, wide black belt. No shoes, by the time I saw her. Not an outfit I would recommend for most people (I believe my position on rompers for adults is well-established). In fact, by “most people” I really mean “anyone who is not an extremely petite teenage punk rock chick who is currently employed in careening around the stage and rebelling against whatever you’ve got.” I just want to make sure that’s clear. 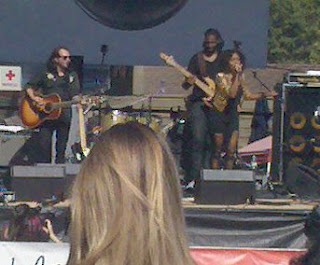 Joining her in the category of Stage Clothes Not to Be Attempted By Mortals, we have Susan Justice, which may not be her actual name, but I don’t care because it’s awesome. Also awesome: this song. Love that chorus; the anthemic stuff gets me every time.

The Outfit: It’s hard to tell from my lousy and distant photo, but that’s not a skirt she’s wearing, that’s a pair of shredded leggings. With a black t-shirt, sequined jacket and slouchy black ankle boots, it’s definitely very rock star, but possibly a bit tough to pull off for a run to the grocery store (but if you attempt it, I want pictures). On the other hand, I think you could swap out the leggings for the black skirt above, and you would have a pretty kickass going-out look. And if “going out” means “going down the street to pick up burritos,” then so be it.