(Yesterday I told you about how I am doing my new workout routine. Today I am telling you why.) 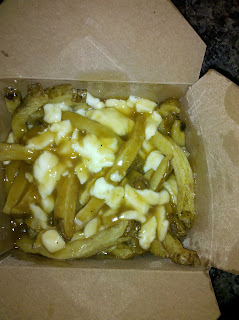 This is poutine. A dish native to Canada (that my American spellcheck doesn’t even recognize as a word) with clear familial resemblance to our own chili cheese fries, it traditionally consists of french fries topped with cheese curds and then coated with beef gravy, which melts the curds and, like the right throw rug, generally pulls the room together. The curds, while not technically fully-developed cheese, are well on their way. They taste like mild mozzarella, for good reason.

The place where we got these particular poutines was called, I think “How Do You Want Your Poutine?” (though I can find no mention of it on the interwebs, so it may be merely a poutine shop of the mind). True to their name, they offered a number of variations of the dish, none of which could be considered particularly “low calorie,” though there was a small size available. (I had the small regular version. The below are both larges.) 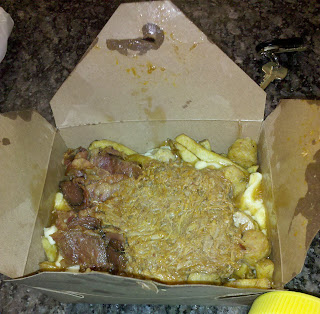 This one was called something like the “triple meat poutine” and sported, on top of the cheese and gravy, pulled pork, sausage and Montreal smoked meat, which is basically pastrami.

It’s difficult to see in this picture, but an aura of evil surrounded the entire dish. 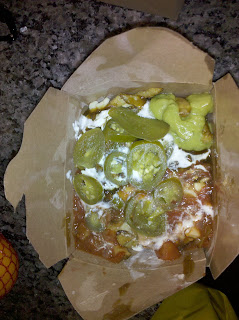 On the other end of the meat spectrum we have this, the vegetarian poutine, made with a non-meat gravy replacement. Not vegan, though, because replacing the cheese would make the whole endeavor lose its meaning.

(Although, as a Californian, I have to suppress a small shudder at the industrial green glop in the corner trying to pass itself off as guacamole.)

As I understand it, the dish exists largely as an after-drinking food, to be purchased in the middle of the night as a way to sop up the excesses of the bar. (Shwarma also serves this purpose but, as it does not contain cheese, it will not be addressed here.) I’m not sure why it hasn’t crossed over in America (or, as I found myself saying after several days in Canada, “the States”)– it has all of the necessary components for widespread success* and we are not generally a nation that is opposed to foods that pile things on top of other things**. The one suggestion I would make to aspiring poutine moguls is that you leave off the word “curds” from the description, because most people here know it primarily in connection with little Miss Muffet, while in Canada they are sold as a snack food.

Of course, it isn’t all joy and cheese curds. Poutine can also be used as a weapon, which is why some groups recommend a cooling off-period, or at least a blowing-on-the-surface-and-chewing-carefully period.

*Grease, potatoes, the ability to be eaten out of a box while standing.
**Exhibit A