The tasteful men’s pirate boot: Fact or fiction? Solid fashion plan or fevered sartorial nightmare? I would have said the former, which is why, when I did this Shoefinder I didn’t even try. But my failure has been bothering me, and that, combined with the fact that we are going to a winery pirate party next weekend** made me think I needed to revisit the topic, and see if I can’t succeed where I once failed***.

First, what we’re not looking for: 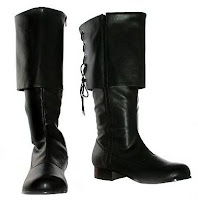 When I say “tasteful,” I mean, “something that could reasonably be worn by a sane person who does not live life like it’s one big Ren Faire, on a day other than Halloween.” So anything with “costume” in the name is right out. Also, black polyurethane boots? Hello, fungus!

Of course, in this context, “tasteful” is kind of relative. 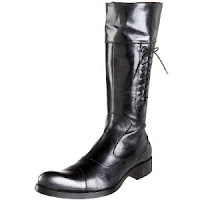 These fall on juust this side of costume-y, which is closer than I usually like to come, but when you’re talking pirate boots, you aren’t talking subtlety.

If, on the other hand, you like the idea of pirates but don’t actually want people to think you’re trying to dress up as one, there’s always this route:**** 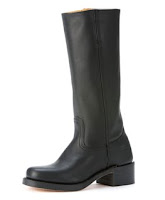 Has the same general idea without all the froofraw.***** I like these, but I’m at a bit of a loss on how to wear them, though I am confident that if worn with shorts the effect would be less “plundering the high seas” and more “mucking out the stable.”

Finally, continuing with the “inspired by” theme, we have these: 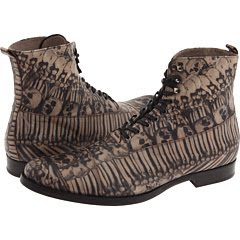 Would an actual pirate have worn them? Well, no. Would he have wanted to? I think so. Will everyone you meet, upon seeing you in these shoes, start thinking about pirates without really knowing why? Absolutely.******

*And by “they,” I mean “me.”
**I will not, to my knowledge, be dressed as a pirate.
***The smart money’s on “no.”
****A word about prices: Yes, everything I have posted here is rather significantly on the expensive side. There are a few reasons for that: a) if you’re going for an extreme style, you want to go as high-end as possible, or the risk of looking tacky jumps exponentially, b) decent quality men’s leather boots are inherently expensive and c) I don’t actually expect anyone to be going out and buying these things.
*****Yes, that is the technical term.
******Well, that or creepy medieval churches.

4 thoughts on “Shoefinder Redux: They* Said It Couldn’t Be Done”