I seemed like things were finally looking up, here on San Mateo’s smallest and least successful tomato farm. The herbs are coming up like crazy,* new little tomatoes were appearing on the plants on a semi-regular basis** and there is one tomato that is actually, genuinely turning red: 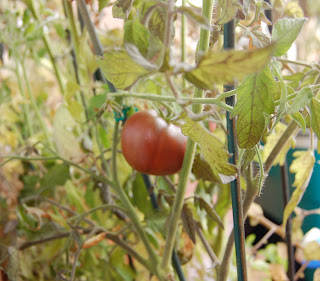 It’s hard as a little rock, but still! Red!

And then disaster struck, in the form of a note from the building’s condo association, taped to our door. It said that the South side of the building, the side where the tomatoes have been, is due to be the first for powerwashing and painting, which will take three weeks, starting today. Which meant that if I didn’t want my precious tomato plants to be watered at 7000 PSI, we were going to have to move them, pronto.

So I staked them up as best I could and Cameron helped me carry the planters across the living room, to the other, larger balcony on the East side of the building. And right now, you’re thinking, well, problem solved, right?

Well, yes and no.

On the one hand the plants should be safe there from the painting and the pressure washing. On the other hand, they’ve gone from the relatively sunny southern side, to the east-facing balcony that only gets sun exposure in the mornings. And, in case you didn’t know, this is what the summer morning sky looks like in San Mateo: 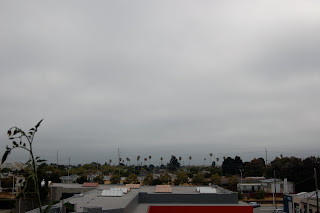 You see my problem. At this point, I’m just hoping something gets ripe before October.

*Anyone need some dill?
**We’re up to thirteen!